Today is the celebration of St Patrick, patron Saint of Ireland. The day is a principal holy day in the liturgical calendar, a holy day of obligation and has become a celebration of Ireland itself. Yet the origins of the man who became the most important Saint in Ireland are as enigmatic as his burial place. 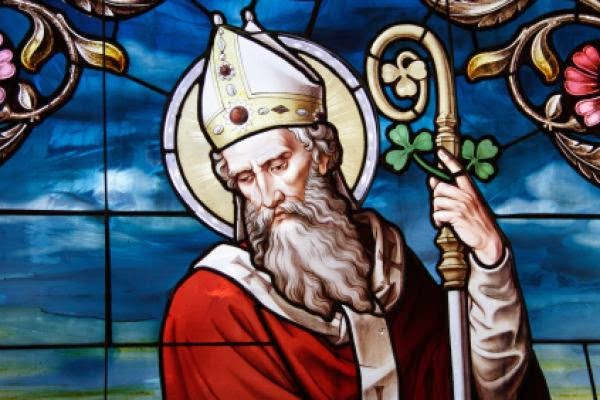 Today 17th March is the feast day of Saint Patrick, Apostle of Ireland, who died on this day at Downpatrick, in 493 AD. In modern times St Patrick's Day has become an international celebration of Ireland. Patrick is said to have used the shamrock in his preaching as a representation of the Holy Trinity. The shamrock has become the symbol of St Patrick's Day.

Most of what we know of Patrick is based on the accounts from hagiographies from the seventh century or later in which we enter the realm of legend. Patrick is said to have banished all snakes from Ireland, chasing them into the sea after they attacked him during a forty-day fast. He is to have carried with him a walking stick or staff made from ash wood. Legend claims that when he pushed this stick into the ground it took root; this place came to be known as Aspatria (ash of Patrick). This is a trick typical in many saint's Lives, such as Joseph of Arimathea's staff and the tale of the Holy Thorn at Weary-all Hill, Glastonbury.

Little is known of Patrick's early life, though it is celebrated that he was born in the late fourth century, towards the ending of Roman Britain, into a wealthy Romano-British family. Patrick provides no dates in his writings that have survived, although they have been interpreted as suggesting that his ecclesiastical conversion did not take place before the early 5th century. Two Latin letters, the Confessio and the Epistola, have been authenticated as being written by Patrick.

In the Confessio Patrick provides a brief account of his early life, writing that he was born in Roman Britain at`Bannavem Taberniae', and that his father was a deacon and his grandfather a priest: "I had as my father the deacon Calpornius, son of the late Potitus, a priest, who belonged to the small town of Bannavem Taberniae; he had a small estate nearby, and it was there I was taken captive". In his Letter to Coroticus, Patrick claims his father was a decurion, a town councillor.

At the age of 16 he was captured by Irish raiders and taken as a slave to Ireland, remaining a captive for six years where he worked as a herdsman. He escaped by sea to an undisclosed land, eventually returning to his home in Britain. He began his studies for the priesthood and said to have been ordained by St. Germanus, the Bishop of Auxerre, whom he had studied under for years. Following his episcopal ordination he was sent to take the Gospel to Ireland. He returned to Ireland in 432 and credited with founding Ireland's first Christian church at Armagh.. Patrick preached and converted all of Ireland for 40 years.

`Bannavem Taberniae' is improbable Latin and is usually amended to Bannaventa Berniae, an unknown location, which has been identified as being near in the north of Britain, east of Carlisle, possibly near to the Roman Fort 'Banna', now known as Birdoswald, towards the western end of Hadrian's Wall. Others locate the place of Patrick's birth at Ravenglass in Cumbria; the similarity of the Roman name 'Glannaventa' needing no further explanation. However, these suggestions do not stand up to scrutiny; the western coasts of southern Scotland and northern England would offer little attraction to a raider seeking quick access to loot and slaves. Furthermore, there was a Roman town called 'Bannaventa', one mile northeast of the village of Norton in Northamptonshire, situated on the Roman road of Watling Street, but this is considered an unlikely target for seaborne raiders as it is deep in land.

Bannaventa Berniae appears to be a Latinisation of a Celtic placename where 'Banna' is Latin for spur or promontory of rock, with 'venta' being the name used by the Romans as a prefix for three civitas capitals: Venta Icenorum (Caistor St. Edmund, Norfolk);Venta Belgarum (Winchester); Venta Silurum (Caerwent, Gwent). Venta has a disputed meaning, it is argued that its is derived from the Brittonic *uentā,meaning something like ‘field’ or ‘market’. The Latin word 'Vendo' means 'to sell', as in the modern word vendor (seller) and the late Latin word 'vendito' means 'market sale' possess the same root. Therefore, it is usually accepted that Venta means a 'market place, or meeting place'. Thus, the names of the three civitas capitals mean the market towns of the the Iceni, the Belgae and the Silures respectively. However, Patrick could have been taken from anywhere on the west coast of Britain subject to raids by Irish pirates; from the south west of England to the Western Isles of Scotland.

South Wales or the south western peninsula of England has been argued for the location of Bannavem Taberniae as these areas were subject to incursions by Irish raiders in Patrick's time. Somerset was highly Romanised, offering a plausible location for Patrick's family estate, unlike some of the more remote locations suggested above. An alternative candidate for Patrick's home town is the late Roman settlement near the village of Banwell, five miles east of Weston-super-Mare, on the North Somerset Levels.

It seems we will never know for certain Patrick's birthplace as controversy continues to surround the chronology of his life and his achievements. The typical, and most popular, view is that Patrick was the only apostle of Ireland who converted the whole country to Christianity single-handedly. He was certainly active in Ireland during the second half of the fifth century. The Irish annals record Patrick's arrival in Ireland at 432, but this date may be confused with the arrival of Palladius in 431. The matter is confused further by the Book of Armagh which says Palladius was known to have also been called Patrick.

Palladius may have accompanied St Germanus of Auxerre to Britain in 429 in response to the Pelagian heresy. After returning to Rome he was despatched by Pope Celestine to Ireland shortly after. He appears to have landed and mainly worked in Wicklow, where three places (Tigroney, Donard, Dunlavin) claim to have churches founded by Palladius. His apostolate does not seem to have lasted long and he moved on to Scotland where he is said to have ended his days at Forddun, Aberdeenshire. It seems fairly certain Palladius was the first bishop of Ireland, but after he moved to Scotland, Patrick seems to have replaced him. However, recent research disputes the traditional dates, suggesting Patrick may have lived a generation or so later.

The chronicle tradition claims that Patrick died in 461. Yet, historians still can't make up their minds about Patrick and the latest wisdom declares that he died on 17 March 493. Several sites claim to be his final resting place, Glastonbury a notable alternative. However, the people of Ireland claim their patron Saint is buried at Down Cathedral in Downpatrick, County Down, alongside St. Brigid and St. Columba. 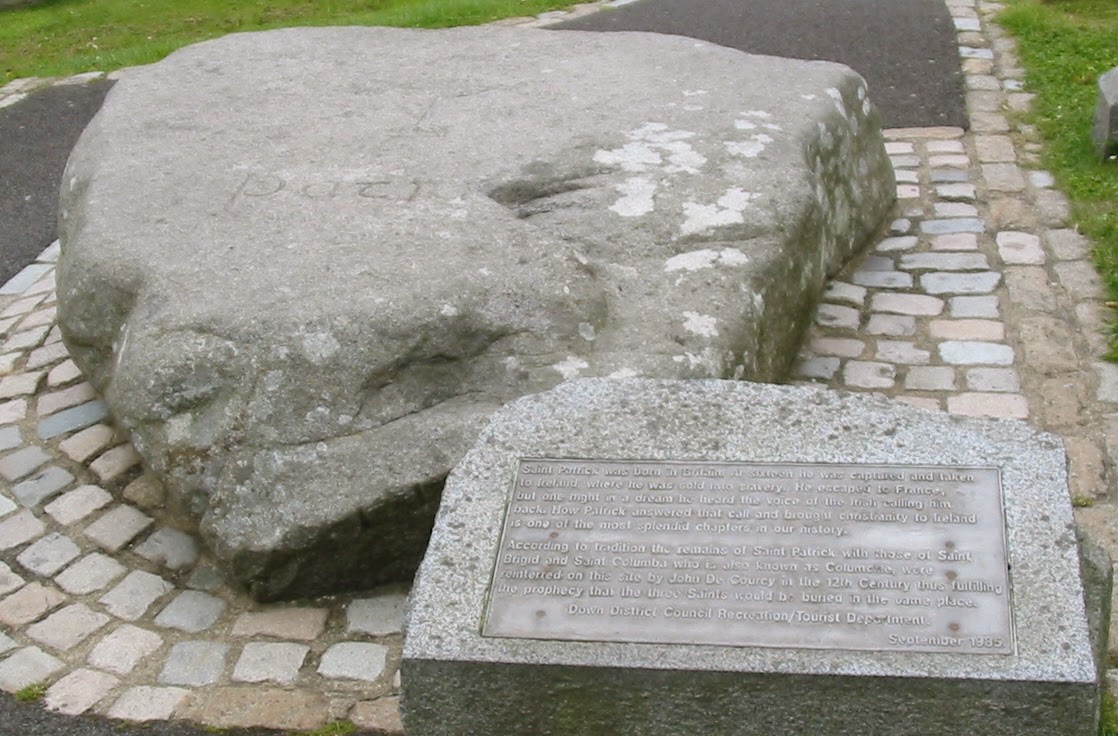 It is said that on the day Saint Patrick died  the sun did not set, but shone for twelve consecutive days and nights. His body was wrapped in a shroud and placed on a cart, drawn by two unrestrained white oxen. The oxen wandered to Downpatrick where it is claimed he is buried. A granite boulder marked with a cross and simply inscribed 'PATRIC' marks his grave.