The Uplands of Hell

And now there came both mist and snow,
And it grew wondrous cold:
And ice, mast-high, came floating by,
As green as emerald.

And through the drifts the snowy clifts
Did send a dismal sheen:
Nor shapes of men nor beasts we ken—
The ice was all between.

The ice was here, the ice was there,
The ice was all around:
It cracked and growled, and roared and howled,
Like noises in a swound!1


On the 19th May 1845 Captain Sir John Franklin set sail from England on an expedition on two ships, Terror and Erebus, to traverse the last un-navigated section of the Northwest Passage.

Explorers have ventured into the icy Arctic regions in search of the fabled Northwest Passage since Columbus and before, seeking a navigable channel connecting the North Atlantic and the Pacific Oceans, providing a lucrative trade route to the wealth of the Orient. The search for a Northwest Passage is said to have begun in the late 15th century with the voyages of John and Sebastian Cabot, who made the first recorded landfalls on the North American continent since the Norse voyages of the 11th century. The quest would continue for more than 400 years, with tales of heroism and tragedy, until the Norwegian Roald Amundsen would successfully traverse the Northwest Passage in 1903-05.

Franklin's two ships became icebound in Victoria Strait near King William Island in September 1846 and never sailed again. The expedition over-wintered on King William Island, northern Canada, after the ice failed to thaw in 1847. In April 1848, Erebus and Terror were abandoned after a year and seven months locked in the ice. Several of the crew, including Franklin had already died, the remaining crew planned to march south toward the Back River on the Canadian mainland and perished in the frozen northlands. The entire expedition complement, including Franklin and 128 men, was lost.

In 1848, following two years with no news from Franklin, the Admiralty launched five ships to find the missing expedition, prompting one of largest searches in history, running from 1848 to 1859. Numerous rescue expeditions were launched in the years following and throughout the 19th century, eventually discovering just a small number of bodies. While surveying parts of the Northwest Passage in 1854 John Rae was presented with items from the Franklin expedition by the local Inuit who told him the men starved to death, after resorting to cannibalism. In 1992, forensic investigations on bodies confirmed that "de-fleshing" had taken place.

The disappearance became one of the great mysteries of the age of Victorian exploration with Franklin becoming what has been termed a "celebrity ghost" after reports of people experiencing psychic visions of him. One such psychic was a girl, known as the “seeress of Bolton”, who could transmit herself to the Arctic to communicate with Franklin. He became a popular request at seances and his wife, Lady Franklin, regularly attended sittings in London.

The supernatural element of the Franklin mystery seems to reflect the Otherworldly atmosphere of the polar regions experienced by many explorers. Sir Arthur Conan Doyle recalls his own experiences on the whaling ship Hope to the Arctic in 1880, when he spent seven months at sea in the cold icy waters of the Arctic, an experience which remained a vivid memory all his life:

“The peculiar other-world feeling of the Arctic regions - a feeling so singular that that if you have once been there the thought of it haunts you all your life - is due largely to the perpetual daylight. Night seems more orange-tinted and subdued than day, but there is no great difference.

...After a month or two the eyes grow weary of the eternal light and you appreciate what a soothing thing darkness is.

....Your sense of loneliness also heightens the effect of the Arctic seas.

....The perpetual light, the glare of the white ice, the deep blue of the water, these are the things which one remembers most clearly, and the dry, crisp, exhilarating air, which makes mere life the keenest of pleasures. And then there are the innumerable sea-birds, whose call is forever ringing in your ears....”2 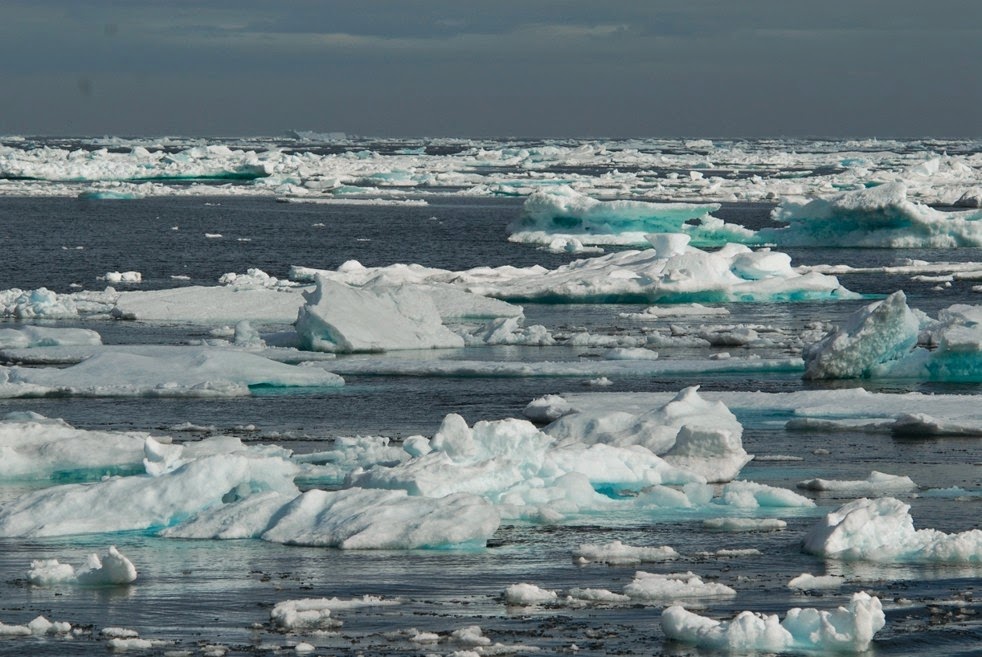 Owing to melting Arctic ice the Northwest Passage has recently become accessible to shipping enabling the Canadian government to begin searching for Franklin's ships, carrying out six major searches since 2008. Now they believe they have found one of the two lost ships from the failed Arctic expedition.

Sonar images from 11 metres below the waters of Victoria Strait, just off King William Island, clearly show the wreckage of a ship on the ocean floor, claimed as the discovery of one of the two ships belonging to the Franklin Expedition. The ship appears to be remarkably well preserved in the iced waters. A sonar image shows the deck relatively intact. Search team leader Ryan Harris believes the rest of the contents of the ship will also be in good condition.

British archaeologist, William Battersby, has described the find as "the biggest archaeological discovery the world has seen since the opening of Tutankhamun's tomb.”

Canadian Prime Minister Stephen Harper delivered news of the discovery of the ship from the tragic expedition, revealing on 9th September 2014 that the vessel had been identified as HMS Erebus, the ship on which Sir John Franklin himself sailed and may even have perished.3

Off topic? Read on.