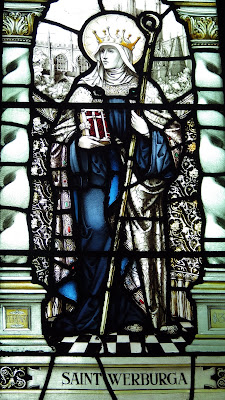 Thirty years of glorious reign came crashing down on the 15th  November 655 AD at the Battle of the Winwaed for Penda the Mercian king at the hands of Oswiu, king of Bernicia. Penda had ruled since 626, enjoying spectacular success on the battlefield with his Welsh allies, defeating Northumbrian kings Edwin and Oswald and setting the foundations for two hundred years of Mercian Supremacy.

Historians see the Battle of the Winwaed and the death of Penda as a defining moment in the demise of Anglo Saxon paganism. In the aftermath of the Winwaed Mercian expansion, dominant since the Battle of Maserfield in 642, remembered for the dismembering of King Oswald of Northumbria, was halted with Oswiu ruling south of the Humber in northern Mercia and installing Penda's Christian son Peada in the southern part of the Midland realm under Oswiu's overlordship. Peada married into the Bernician Royal line but by the spring of the following year was dead; according to Bede and the Anglo Saxon Chronicle Peada was betrayed by his own Queen, Oswiu's daughter, during Easter 656. Oswiu was now overlord of all Mercia.

Any hopes of long term control of Mercia by the Northumbrians was dashed in 658 when Mercian nobles led a rebellion and installed another of Penda's sons, Wulfhere, who they had kept in hiding since the Winwaed, as king of Mercia. Wulfhere established himself as overlord of Britain south of the Humber, becoming dominant through successful campaigns against Wessex which saw Mercia take control of London and the Thames Valley and as far south as the Isle of Wight.

Wulfhere married Ermenilda, the daughter of King Eorcenberht of Kent and Seaxburh of Ely, a daughter of Anna, King of East Anglia. Seaxburh founded the abbeys at Milton Regis and Minster-in-Sheppey. She moved to the double monastery at Ely, the precursor to Ely Cathedral, where her sister Æthelthryth was abbess and succeeded her when Æthelthryth died in 679. She was apparently buried in a common grave where she lay for sixteen years until 695 when Seaxburh arranged the translation of Æthelthryth's relics to a white marble sarcophagus, taken from the Roman ruins at Grantchester, to the new church at Ely. On opening the grave her body was found to be incorrupt and she was declared a saint. The matrilinear succession at Ely transferred from Æthelthryth to her sister  Seaxburh, and would then pass to her daughter  Ermenilda and then her granddaughter Werbugh after the death of the king of Mercia.

Wulfhere had two children with Ermenilda, a daughter, Werburgh and a son, Coenred. Wulfhere was the first Christian king of all of Mercia and brought St Chad to the Midlands, though it is not known when he converted from Anglo-Saxon paganism. The foundation legend of Stone in Staffordshire claims Wulfhere had two further sons Wulfad and Rufin. According to the railings at Granville Square at the top of the high street the foundation was 670, so presumably Wulfhere converted after this date. The local story goes that the Royal Palace, the legendary Wulferecestre, was situated at Bury Bank, a huge Iron Age hill fort on the west bank of the Trent, two miles north of Stone. The two young Princes are said to have converted after meeting St Chad. Wulfhere was enraged and hunted down his sons killing Wulfad at Stone and Rufin at Burston. Ermenilda and sister Werburgh gathered up their bodies and interred them “under a great sepulchre of stones”, hence the name of the town, where they built a priory. Little evidence of the priory remains today, some walling remains in Abbey Street and a rib-vaulted undercroft in a house called 'The Priory' in Lichfield Street but these are dated to an Augustinian priory founded c.1135. The priory seems real enough even if the legend does not; in 2011 a 13th century bronze seal from the priory, was found in a field in Cobham, Surrey bearing the inscription "the seal of the church of Saint Mary and Saint Wulfad, Martyr of Stone". The modern St Michael and St Wulfad's church was built on this site in the 18th century constructed with stone from the collapsed 12th century priory.

Wulfhere died in 675; Henry of Huntingdon claimed it was due to disease. His brother Æthelred took the throne and his widow, Queen Ermenilda, retired to the Minster-in-Sheppey where she is said to have become abbess although little contemporary information exists. When her mother Seaxburh resigned as abbess at Minster and went to Ely, Ermenilda succeeded her. When Seaxburh died at Ely twenty years later Ermenilda became Ely's third royal abbess in succession. Her cult was extensive but contemporary records are silent on her time there, surprisingly not even the date of her death is recorded.

After her father's death Werburgh became a nun at Ely and probably succeeded her mother as abbess there. However, her uncle King Æthelred is said to have recalled her to Mercia and gave her charge of three nunneries in the realm. Werburgh is said to have founded or reformed the houses at Weedon (Northants.), Hanbury (Staffs.) and Threckingham (Lincs.) where she died on 3rd February c.700. At her request she was buried at Hanbury.

Translation to Chester
Although St Werburgh did not have any special connection with Chester in her life time her remains were moved there for safety when the Viking onslaught swept through Mercia. Ranulf Higden, who entered the Abbey of St. Werburgh in 1299, tells us that St Werburgh's remains were translated to Chester in 875 to protect it from the encroaching Danes, then at Repton. Higden states the Saint's uncorrupted remains were deposited in the old church of St Peter and St Paul there on 21 June which became the Saint's festival day.

Another monk from the abbey, Henry Bradshaw (d.1513), records in his hagiography of Chester’s patron saint that when Chester was restored c.907 by Æthelflæd, Lady of the Mercians, she enlarged the church as a college of secular cannons and dedicated it to St Werburgh. Another translation at Chester in 1095 was the occasion of Goscelin of St Bertin to write her Vita.

The Abbey of St. Werburgh had considerable authority right up to the time of the Dissolution, no doubt owing its impressive appearance and the presence of the relics of St Werburgh. A shrine was constructed to house the Saint's relics in the early 14th century, where Bradshaw records a number of miracles and became a place of pilgrimage.

The Abbey of St Werburgh was dissolved in January 1540 but rather than being wrecked like most religious houses that fell to the mercy of Henry VIII's Commissioners just over a year later in July 1541 the church became the seat of the newly created diocese of Chester with the last Abbot of St. Werburgh’s becoming the first Dean of the Cathedral. Formerly Cheshire was part of the Diocese of Lichfield. Werburgh's girdle was among the relics listed by the Royal Commissioners. After the Reformation the shrine was turned into the bishop's throne. The fragments have been reconstituted and today stand behind the High Altar in the Lady Chapel of Chester Cathedral where Werburgh's remains are said to lie. At the west end of the Chapel stands the shrine of St Werburgh. Next to the Lady Chapel is the peaceful Chapel of St Werburgh.

Midsummer Celebrations
No one knows for sure when midsummer processions started at Chester but they have been recorded since 1195. The Chester Midsummer Fair was held annually on ground owned by the Benedictine convent of St.Werburgh before the Abbey gate. At that time the Abbot was granted the rights to hold an annual fair in the abbey precinct, known as St Werburgh's Fair.

The midsummer parade included giants, unicorns, dragons and hobbyhorses in something similar to May Day celebrations. In the 17th century the Midsummer Watch Parade was abandoned but revived in 1989. The Giants, Beasts and other structures of today's parade are loosely based on contemporary records of the original. Today the parade takes place on the Saturday and Sunday closest to Midsummer and traditionally includes St Werburgh and flocks of geese, her emblem from an old legend. This year the Midsummer Watch Parade takes place on Saturday 20 & Sunday 21 June, starting from the Abbey Gateway at 2pm.

It often assumed that the Midsummer Watch Parade has its origins in earlier, long forgotten pagan rites, yet this date in Chester just happens to coincide with the translation of St Werburgh's relics to the Abbey and the celebration of the Mercian Princess who became Patron Saint of Chester.