Alban lived during the 3rd century in the Roman city of Verulamium. He gave shelter to a Christian priest fleeing persecution. Before long the authorities came to arrest the fugitive priest. But Alban, inspired in his new-found faith, exchanged clothes with him, allowing him to escape. Alban refused to renounce his faith and was executed in his place.

He was brought out of the town, across the river and up a hill to the site of his execution. Legend tells us that a spring of water miraculously appeared to quench Alban’s thirst and the executioner’s eyes fell out after he had beheaded Alban.

Saint Alban, feast day 22 June, is honoured as the first British martyr, and his grave, where the Cathedral and Abbey Church of St Alban now stand, soon became a place of pilgrimage, a journey which has continued for over 1700 years. 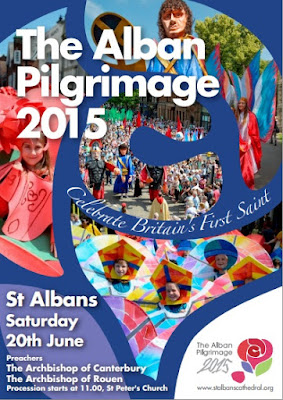 This year the Pilgrimage begins at 11:00 on Saturday 20 June at St Peter’s Church with a procession through the city centre to the Town Hall where the Archbishop of Canterbury will address the people.

The procession continues along Holywell Hill to St Albans Cathedral where giant puppets will retell the story of Alban’s martyrdom with the re-enactment of Alban’s beheading taking place outside the West End entrance, followed by the procession into the Cathedral for the Festival Eucharist.