The Passing of Arthur

“Back to to the sunset bound of Lyonnesse -
A land of old upheaven from the abyss
By fire, to sink into the abyss again;
Where fragments of forgotten peoples dwelt,
And the long mountains ended in a coast
Of ever-shifting sand, and far away
The phantom circle of a moaning sea.” 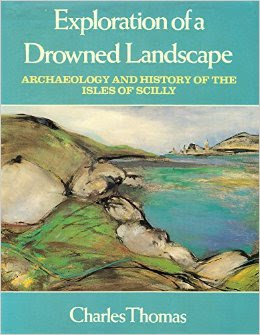 “The background to this Idyll is, to say the least, mysterious,” writes Charles Thomas in Exploration of a Drowned Landscape (Batsford, 1985. pp.265-267). He continues:

“The earlier poem, Morte D' Arthur, according to Hallam Tennyson completed by 1835, appeared in the famous 1842 collection. Tennyson's devotion to the Arthur theme began in boyhood, with his discovery of Malory's Le Morte d'Arthur. Significant facets were then lodged for ever in his mind, as when in a youthful MS note (1833) he could write how, in 'the latest limit of the West in the Land of Lyonnesse, where, save the rocky Isles of Scilly, all is now wild sea, rose the sacred Mount of Camelot.'

"In the  Morte D' Arthur the great king, mortally stricken, is carried from the battlefield by Sir Bedivere to a little chapel by the seaside; this is drawn directly from Malory's version. Here, after twice prevaricating, Bedivere hurled the sword Excalibur into the water, where an arm in white samite rose to grasp it. Here too a barge with ladies clothed in black arrived to take the dying king to Avilion The water, stirred by winds and waves, is implicitly the open sea in Sir Thomas Malory's recital, and the barge with its Dark Queens moves slowly away. Insofar as the nearby Last Battle was located at all closely, Malory placed the event somewhere by the south coast, on a down near Salisbury that was also not far from the English Channel shores.

"Tennyson, however, decided that Arthur departed from Cornwall; in 1835 and 1842 he was specific. The chapel nigh the field of the battle

'stood on a dark strait of barren land.
On one side lay the ocean, and on one
Lay a great water, and the moon was full.'

"This great water is fringed with juts of pointed rock, crags, reeds and bullrush beds, and a margin with many-knotted waterflags. It is fresh water, and the dark strait is barren because it consists of pebbles. The side which is not the ocean is a lake or mere. Even its true orientation is given. When the barge approached across this lake, and goes again with Arthur, Sir Bedivere stands to watch

'till the hull
Look'd one black dot against the verge of dawn,
And on the mere the wailing died away.'

"Clearly then the barge was departing eastwards, across a lake which was bounded on its western side by firstly a pebble bar and then the sea. Only one place in Cornwall fulfils these conditions: the remarkable freshwater lake, Loe Pool, on the western shore of the Lizard peninsula. It is fed by the river Cober which flows into it just below Helston, and is penned by the massive shingle barrier, Loe Bar, now pierced by an outflow tunnel.

"The northern side of the Pool near the Bar has low jagged cliffs with pines; there is some vegetation along the water's edge. Looking inland, north-east,  from the Bar itself, the vista is not only romantic and impressive, somehow reminiscent of the Lake District or perhaps Austria rather than of Cornwall, but also suggests an inland water-stretch much longer than it really is.

"Tennyson's Morte D' Arthur, published in 1842, was re-used with virtually no alterations as the core of The Passing of Arthur; the much longer Idyll. Last of 12, published in 1869. In the interval the poet has twice toured Cornwall. The first occasion, May to July of 1848, was a solitary visit; he went to Bude, Tintagel, Camelford, the Land's End and the Lizard, enjoying long coastal walks. At Morwenstow he met the idiosyncratic Robert Stephen Hawker, whose own interests included matters Arthurian.”