A hoard of Roman coins found in a field in Barlaston has been ruled as treasure, a coroner has found. The majority of the find will now go on display at The Potteries Museum and Art Gallery in Hanley, Stoke-on-Trent, where there is already a permanent Staffordshire Hoard display.

The hoard was found by Stephen Squire of Barlaston who told North Staffordshire Coroner’s Court that he had been metal detecting with the owner's permission in a field near in his home village of Barlaston, Staffordshire, earlier in 2015. On this occasion he found a handful of coins, but when he returned to the site on 4th October 2015 he made a further discovery of more than 2,000 items, mainly coins but included a piece of copper alloy metal, an iron tool and a crucible of lead. Mr Squire duly reported the find to the British Archaeology liaison officer for the West Midlands. 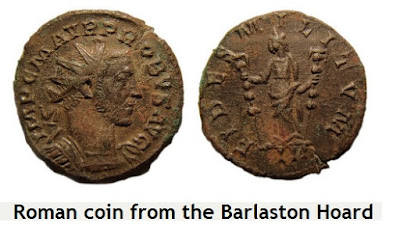 The finds were then sent for analysis to Dr Richard Hobbs, curator at the British Museum in London. Dr Hobbs confirmed that 2,015 of the items were dated at around 37AD, making them of Roman origin – some of which were rare coins. Both The British Museum, who has expressed interest in acquiring three items, and The Potteries Museum are looking to set up exhibits using the treasure.

The last discovery of this size was in 2009 when ancient gold and silver val;ued at £3.3m was found in a field near Lichfield in 2009. The find, known as the Staffordshire Hoard, contained over 3,500 items of Anglo-Saxon martial decoration, predominantly sword pommels.

The Roman coins at Barlaston were discovered only three miles from the Lightwood Hoard discovered in  the  garden  of  698  Lightwood  Road, Stoke-on-Trent. The Lightwood Hoard was discovered in June 1960 by Mr J Allen who was digging in his garden when he came across a red-brown earthenware pot. Inside the pot were 2,461 coins, of which 1,739 were Roman and dated to the 3rd Century together with a further 722 coins of non-Roman origin, a pair of silver snake bracelets and part of a silver clasp. Mintmarks  indicated  that  the  hoard  was  buried after AD 276. The Lightwood Hoard is now on permanent display at the Potteries Museum. 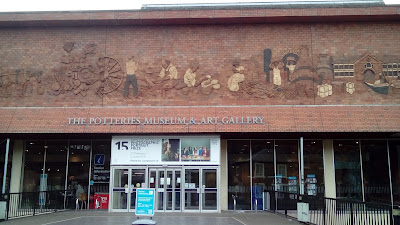 Under the Treasure Act 1996 all potential historic discoveries has to be reported to a coroner’s court to establish its status as treasure. Now officially declared as treasure the Barlaston Hoard will be formally valued by the Portable Antiquities Scheme's Treasure Valuation Committee. Mr Squire and the landowner have agreed to share the money.

Teresa Gilmore, finds liaison officer for the West Midlands, said: "The coins would likely have been a farmer's savings that he buried in the field or could have been a donation to the gods. We don't get many finds like this in the Staffordshire area."

Ms Gilmore urged Mr Squire to waive some of his fee to The Potteries Museum and Art Gallery, the recognised repository for archaeological finds from the county, to assist with their exhibit of the Barlaston Hoard due to open next summer.

The persisting mystery of these hoards is that someone went to the trouble to bury the treasure, presumably with the intention of retrieving it at some future point; but how they acquired it and why they never recovered it will never be known.