The remains of seven individuals unearthed at Beckery Chapel, near Glastonbury in Somerset, during excavations in May by the South West Heritage Trust have been dated to the 5th or early 6th Century AD. Director of excavations Dr Richard Brunning hailed the discovery as the earliest archaeological evidence for monasticism in the UK, predating Iona Abbey in Scotland, founded in the late 6th Century, and nearby Glastonbury Abbey, which dates from the 7th Century.

Dr Brunning envisaged a small community of monks at Beckery, more like a large hermitage living  in a few basic buildings constructed of wattle and daub, nothing grand made of stone. The earliest monks died between 425 to 579 AD with burials continuing at Beckery until the early 9th Century AD. Further tests are planned to establish if the people buried in the cemetery were local or from distant areas.

Excavations have revealed that a small Chapel or Oratory existed at Beckery on the western side of Glastonbury. It was first dedicated to St. Mary Magdalen, but later known by the name of St. Brigid. Said to be in ruins by the late 18th century, today there is no visible indication of the site of this chapel above ground. St Bridget's chapel was situated on the highest part of Beckery Hill, or “island” in a field called Chamberlains Hill.

In the 12th century William of Malmesbury (De Antiquitate) and John of Glastonbury (Cronica), 14th century, claim that St Brigid visited Glastonbury in 488 AD. Significantly, this date is very close to the traditional date of the saint's founding of the Kildare Monastery in 490 AD. The interpolated edition of William's De Antiquitate states that St Brigid stayed at Beckery.  When she returned to Ireland she left behind some relics, her bell, wallet and weaving instruments that were apparently kept at the chapel. However, the earliest Lives of St. Brigid make no mention of her coming to Glastonbury.

The site at Beckery has been investigated twice before, once by the local antiquarian John Morland in the 1880’s and then in the late 1960's by Philip Rahtz.

Morland exposed two phases of stone foundations of the chapel and the adjacent priest's house. The foundations were explored in 1887-8 and proved to be those of two chapels, one within the other. Finds of tiles and two silver coins suggest a 13th century date for the outer and later chapel, and although nothing was found to test the age of the inner foundations, the extremely massive walls of this tiny chapel would be comparable with Saxon work. One inhumation burial orientated with head to the west and without a coffin, appeared to predate both chapels. About 20ft to the north-east are the foundations of an apparently later building.

Beckery Chapel and a small part of the neighbouring priest's house were excavated by Philip Rahtz in 1967-1968, unearthing around 60 skeletons. Some prehistoric flints and pottery, together with a few Roman artefacts were found, but Rahtz identified three main phases of settlement:

The first phase consisted of post-Roman or Anglo-Saxon activity. A possible timber structure, which contained a cist grave, (HB18) could have been either a chapel or merely a tomb-shrine. No definite plan could be defined, but there were three areas where post-holes concentrated. A cemetery was found containing at least 63 skeletons, all male apart from one woman and two children, some graves being cut by a ditch, together with wattle and daub structure, dated tentatively to the middle Anglo-Saxon period. Carbon-dating of HB18 returned a range of between 765 AD - 730 AD.

The second phase Rahtz dated to the Anglo-Saxon period and early medieval to 13th century when the first stone chapel was constructed. This chapel continued in use until the 13th century. A wall parallel to the south wall of the nave may be connected with the dedication of a “penitent's crawl” into the chapel. John of Glastonbury wrote of a hole in the south wall of the chapel through which people would crawl for forgiveness of their sins.

The final phase in which activity spanned from the late 13th century to the 15th century. The chapel was rebuilt of blue lias with mortared course masonry with deep foundations, enclosing the earlier chapel almost completely. 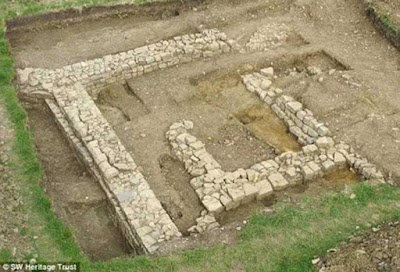 Rahtz concluded that Beckery was a minor monastic site, possibly with a holy shrine, in existence from Anglo-Saxon times until the Dissolution. He found no evidence that there was any activity on the site in the 5th or 6th centuries, when according to legend, the site was visited by St Brigid who reputedly left some of her relics there, which subsequently became a place of pilgrimage. Hence, the Irish name for Beckery (Bec-Eriu) means ‘Little Ireland’.

This new dating evidence places the first Christian community at Beckery firmly in the days of the legendary King Arthur who Medieval Glastonbury sources claim witnessed a vision of the Virgin Mary and the infant Jesus at the chapel. And isotope studies will reveal these first monks came from Ireland. It seems a re-write is due.