Arthur and the Kings of Britain


The historians tells us that in 409 AD the Romans withdrew from these Isles and left the Britons to fend for themselves in the face of the barbarian onslaught. Britain then entered a so-called 'Dark Age' lasting for nearly two hundred years until the Anglo Saxons took control of the island. It is during this shadowy period that the legendary King Arthur emerges from the mist to repel the invading Germanic tribes.

Historians like to construct an ordered chronology; the Celtic Iron Age ended with the arrival of the Romans. The Roman period ended in 409; The Anglo Saxon period began in 597, and so on. But in reality it's never that simple. Increasingly more historians now see the authorities in Britain rebelling against Rome, ejecting the imperial officials, and setting up their own government; an independent Britain emerged from the grasp of Roman control.

Our one British contemporary source, Gildas, tells that this was the time of the 'Proud Tyrant', which later sources identify with a man titled 'Vortigern', invited the Saxons to defend the island against attacks from the Picts and the Irish. In his 6th century De Excidio Britanniae (Concerning the Ruin of Britain) Gildas cetainly paints a dark picture of violent invasion.

In the 8th century Bede, following Gildas, provides an ‘English’ perspective in his Historia Ecclesiastica Gentis Anglorum (Ecclesiastical History of the English People) in describing the conquest of Britain. Then, the 9th century Anglo-Saxon Chronicle used foundation legends to assert the right of the English dynasties to rule over the hapless Britons.

The British story was told in the anonymous Historia Brittonum (History of the Britons), often ascribed to a certain monk named Nennius, but this document's value as a historical source is unreliable to say the least.

Thus, the available sources for the period paint a very one-sided picture; we have the Roman version and the Anglo Saxon version. What of the Briton's own story?

In the 12th century Geoffrey of Monmouth produced the  epic work The Historia Regum Britanniae (History of the Kings of Britain) which traced the history of the Britons from the arrival of Brutus the Trojan to Cadwallader, the last of the British kings, in the 7th century.

Geoffrey claimed that his source was "a very ancient book in the British tongue". He never named his source and the absence of such a book today has added weight to the claims that he simply invented it all.

It is obvious to even the casual reader that Geoffrey’s work contains numerous fictional tales, he writes of a world of wizards and giants, so it’s hardly surprising that, within a few years of publication serious doubt were being cast on the authenticity of his research. In 1190 William of Newburgh declared that “it is quite clear that everything this man wrote… was made up”.

Nonetheless, Geoffrey's Historia was a medieval bestseller and copies spread across the whole of western Europe, over 200 manuscripts survive from the period showing the Historia's popularity. It was regarded as 'history' for some 500 years. However, today most scholars regard Geoffrey's work as a work of fables and untrustworthy, at best a literary work of national myth. It seems then that we do not possess a reliable account of the Britons in the period between the Romans and the arrival of the Anglo Saxons. 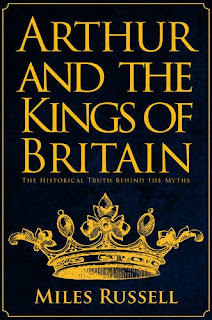 Now in his latest book, Arthur and the Kings of Britain (Amberley Publishing, 2017) Dr Miles Russell examines Geoffrey's so-called fiction and claims the Historia actually provides a priceless insight into what life was really like for the inhabitants of Celtic Britain.

Having examined the Historia in great detail as part of Lost Voices Project, Russell claims the current negative view of the epic does Geoffrey a huge disservice and argues that the Historia is actually formed from "a mass of unrelated stories woven together to form a grand narrative" and that, once this is accepted, "it’s easier to tease out individual tales".

Russell, a senior lecturer in prehistoric and Roman archaeology at Bournemouth University, sees the key to unlocking Geoffrey’s text lies in the account of Julius Caesar’s invasion of Britain, the first ‘event’ in the book that can be independently verified from other historical sources.

Julius Caesar made two expeditions to Britain in 55 and 54 BC. In his own account of his second invasion, recorded in his Gallic Wars (De Bello Gallico), there are three main players: Caesar himself; a British king called Cassivellaunus, king of the Catuvellauni; and a Roman ally named Mandubracius, king of the Trinovantes of south-eastern Britain in the 1st century BC.

Geoffrey replicates these events in his Historia, but sets them down as two separate events in what appears initially as a confused jumble. In the first, he has Ilkassar (Caesar) defeated by the Briton Cassibellaun (Cassivellaunus) at the 'Battle of Dorobellum'. In the second version, Geoffrey sets Cassibellaun as the aggressor waging war upon Androgeus (Mandubracius), when he receives news that Ilkassar has landed upon the south coast. At the battle of Durobernia, Ilkassar is victorious owing to the assistance of Androgeus acting as an ally of the Romans.

Russell argues that in describing the Roman incursion, Geoffrey appears to be using two different records of the same event, written from two entirely different perspectives. In the first account, generated by supporters of the British king, Cassivellaunus is portrayed as the hero; whereas the second is written from the perspective of Mandubracius; and suddenly Geoffrey's account of Caesar's expedition becomes clear.

Russell is a regular contributor to television and radio, appearing in Time Team, Timewatch, The Seven Ages of Britain. He is one of the few living archaeologists to have excavated at Stonehenge, having lifted the turf of the bluestone circle in 2008 with Geoffrey Wainwright and Timothy Darvill.

He is the author of fourteen books, including UnRoman Britain: Exposing the Great Myth of Britannia (with Stuart Laycock) (The History Press, 2011); and Bloodline: the Celtic Kings of Roman Britain (Amberley Publishing, 2010).

In his latest book, Arthur and the Kings of Britain (Amberley Publishing) due 15th March 2017, Russell argues Geoffrey's Historia was originally compiled from a variety of genuine sources, most of them generated from what is now the south-east of England, dating the first century BC.

Far from being a single fictional epic, Russell asserts, the Historia consists of a mass of unrelated stories woven together by Geoffrey in order to form one grand narrative.

When viewed objectively, he adds, the individual tales can radically change our understanding of British history, arguing that the Historia was set down by the ancient Britons themselves; recording how they dealt with the arrival of the Romans, and subsequently the events following the ejection of Roman authority in the early 5th century AD. It is, Russell maintains, their ‘lost voice’.


Arthur and the Kings of Britain: The Historical Truth Behind the Myths, by Miles Russell is due publication 15th March 2017 by Amberley Publishing.