The Arthurian Place Names of Wales

In The Giants of Wales: Cewri Cymru (Edwin Mellen, 1993), Chris Grooms lists no less than thirty-one instances of 'Coetan Arthur' (Arthur's Quoit) in Wales as the name most commonly occurring amongst prehistoric cromlechs and burial chambers, with the names of the capstones making the greater part of the listing.

The Arthurian place-name clearly suggests that Arthur played quoits here, throwing the capstone from some distant hill. The word "quoit" first appears on maps in the 16th century, but no one can be sure when these prehistoric megalithic sites were first named after King Arthur.

And these do not include all the other antiquities and natural features bearing Arthurian place-names such as Arthur's Chair, Arthur's Stone, Arthur's Grave and such like.

However, the earliest recorded onomastic tale to feature topographical folklore associated with Arthur is found in the 9th century Historia Brittonum within the Harlian 3859 manuscript. Chapters 67-75 of this work contain a description of various mirabilia, or 'Marvels' of the Island of Britain.

Two of these marvels are Arthurian in context. The first is the tomb of Arthur's son Amr at  a spring called Llygad Amr in Ergyng (Ercing), modern Herefordshire.

The other is in the country called Builth, Wales. Here a heap of stones is said to bear the footprint of the warrior Arthur’s hound when he hunted Twrch Trwyth. The pile of stones is called Carn Cafal (Carn Cabal). If a stone is removed from the pile the next day it will be found back on the carn.

Carn Cabal is one of the Arthurian sites that actually traces the geography of the tale, in this instance the Boar hunt across southern Wales from Culhwch and Olwen. Many sites associated with Arthur do not necessarily represent Arthurian geography, but in Wales there is an abundance of prehistoric site associated with Arthurian traditions. Many of these can be found scattered throughout books on the prehistoric remains in Wales and the Arthurian connection is noted but rarely explored.

Now a new book gathers together for the first time ever all the place names related to King Arthur that are found within Wales. These includes the multitude of Arthur's Quoits, Arthur's Seat, Arthur's Table and so on. 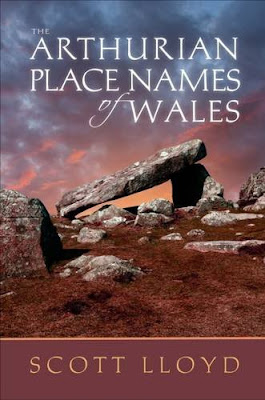 The Arthurian Place Names of Wales by Scott Lloyd (UWP, 2017) promises to offers full details on the history and mythology of more than one hundred and fifty sites in Wales, drawing on sources from the 9th to the 19th century. The result is claimed as a comprehensive look at the extensive traces of the Arthurian legacy on Wales and Welsh culture.

"This new book examines all of the available source materials, dating from the ninth century to the present, that have associated Arthur with sites in Wales. The material ranges from Medieval Latin chronicles, French romances and Welsh poetry through to the earliest printed works, antiquarian notebooks, periodicals, academic publications and finally books, written by both amateur and professional historians alike, in the modern period that have made various claims about the identity of Arthur and his kingdom. All of these sources are here placed in context, with the issues of dating and authorship discussed, and their impact and influence assessed. This book also contains a gazetteer of all the sites mentioned, including those yet to be identified, and traces their Arthurian associations back to their original source."

Scott Lloyd works at the Royal Commission on the Ancient and Historical Monuments of Wales, and has served on the committee of the British Branch of the International Arthurian Society. He lives near Aberystwyth.

The Arthurian Place Names of Wales by Scott Lloyd is due to be published on 15th May, 2017 by the University of Wales Press.