Few legends have had the enduring influence of those surrounding King Arthur. Many believe the stories are based on historical truth. For others Arthur represents the archetype of the brilliant monarch reigning over a fairy-tale kingdom, offering his knights the opportunity to prove their mettle in battle and find gnostic illumination through initiation into sacred mysteries like that of the Grail. 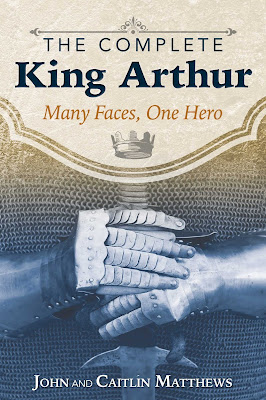 John and Caitlín Matthews have been studying the Arthurian legends and their background for more than 40 years. Recognised authorities on myths and legends of the Celtic tradition, they are the prolific authors of more than one hundred books on myth, faery, the Arthurian Legends and Grail Studies, including 'Arthur of Albion', 'The Arthurian Tradition', 'The Grail Tradition', 'The Grail Seeker’s Companion', 'Merlin: Shaman, Prophet, Magician', 'Taliesin: The Last Celtic Shaman', 'Sir Gawain, Knight of the Goddess', 'King Arthur's Raid on the Underworld'.

Their latest book "The Complete King Arthur: Many Faces, One Hero" presents the culmination of those many years of research in the Arthurian legend, in which the authors examine the historical and mythological evidence for every major theory about the existence of Arthur, piecing together the many fragments that constitute his image.

This new book promises to be a comprehensive examination of the historical and mythological evidence for every major theory about King Arthur, examining 1,800 years of evidence for Arthur’s life and the famous series of 12 battles fought against the Saxons in the 6th century.

In the "The Complete King Arthur" the Matthews' reconstruct the history of 6th century Britain, the period when the first references to Arthur and the core events of his reign appear. The book will explore the history of every Arthur candidate and the geographical arguments that have placed him in different locations,

Examining other literary figures from the 5th century such as Vortigern and Ambrosius, the authors also break down the plots of all the major Arthurian romances, including those by Chretien de Troyes, Sir Thomas Malory, and Robert de Boron, to reveal the historical events they are based on. 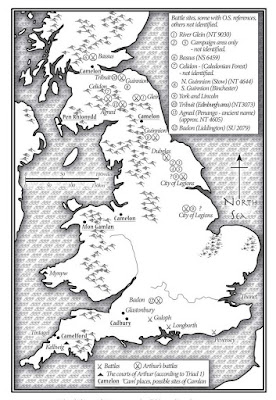 Arthur of the Battles

"So where did Arthur of the Battles originate? There is a poem in the Book of Taliesin that gives us a clue to his antecedents and makes powerful sense. Already mentioned in chapter 1, where it has been seen as complementary evidence for the Roman origins of Arthur, “Kadeir Teyrnon” may also support the antecedents of a fifth-century northern Arthur. The poem discusses the ruler of Britain as a man born and bred on the Wall as well as one militarily qualified to its supervision.

Declare the clear ode
In inspiration’s own metre:
A man sprung of two authors,
Of a cavalry wing’s steel.
His spear and his wisdom,
His judicious course,
His kingly sovereignty
His assault over the Wall,
His rightful seat Amongst the defenders of the Wall. . . .

From the slaughter of chieftains,
From the destruction of armies,
From the loricated legion,
Sprang the Guledic,
Around the fierce old boundary.4

The “fierce old boundary” is none other than Hadrian’s Wall (see plate 3). This poem suggests a man who was born either of native stock and Roman lineage or perhaps one who is half-native and half-foreigner; we might take our pick from the men of Rheged, the Gododdin, or of Pictish or Dalriadan origin, which might help explain from whence the name “Arthur” was first introduced." 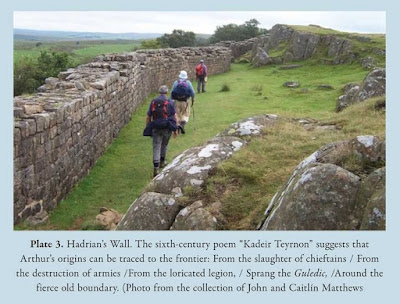 The Complete King Arthur: Many Faces, One Hero by John and Caitlín Matthews is due publication by Inner Traditions in April 2017.


*NOTE: Posting news / information of a books publication is not necessarily an endorsement of its contents by the author of Clas Merdin.