Imbolc, synonymous with Saint Brigid's Day, is celebrated annually on 1st February. One of the four major seasonal festivals along with Beltane, Lughnasadh and Samhain, Imbolc is one of the oldest feasts celebrating the arrival of spring in Celtic mythology. Since the earliest of times Imbolc has been associated with the goddess Brigid, the goddess of the dawn.

Imbolc is thought to have been significant in Ireland since the Neolithic period as attested by the alignment of some Megalithic monuments.

The illumination of the passage and chamber by the sunrise on the winter solstice at the Neolithic passage tomb at Newgrange is world famous. Similar solar alignments can be found at many other passage tombs.

Significant that at Newgrange it is only the light that enters through the light box above the main passage entrance that reaches the back of the chamber. Recently Michael Gibbons has claimed that the light box was “fabricated” during reconstruction by Michael O’Kelly in the 1960s. But when considered with solar alignments at other passage tombs in Ireland this claim seems nonsensical.

Today celebrated on 1st February, Imbolc is considered to mark a Cross Quarter Day indicating the midway point between the winter solstice and the spring equinox, astronomically calculated to fall between the 2nd & 7th of February.

At the 5,000 year old Mound of the Hostages on the Hill of Tara the rising sun at Imbolc enters the passageway and illuminates the chamber.

At Loughcrew a cluster of megalithic cairns are aligned to display tricks of light at certain solar festivals. A beam of light at sunrise on the spring and autumnal equinoxes illuminates the passage and strikes the backstone of the chamber at Cairn T.

But on St Brigid's Day at Loughcrew Cairn L a beam of light from the Imbolc sunrise illuminates the passage and chamber and strikes a six-foot tall limestone standing stone in the cairn.

Perhaps memory of Brigid stretches back to the days of the construction of these Neolithic mounds. Her cult is certainly ancient. Saint Brigid's Cross is one of the archetypal symbols of Ireland, while today it is considered a Christian symbol, it seems to have its roots in the pre-Christian goddess Brigid. 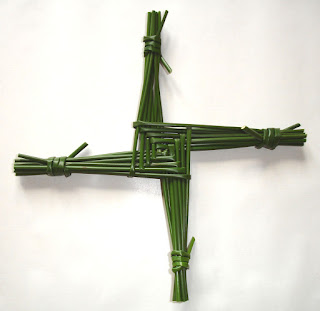 Brigid's Cross was traditionally made of rushes on the eve of Brigid's feast and hung on kitchen walls, over doorways and windows to protect the the household from harm, a custom that can be found surviving in many Irish homes today, although it is likely far older than Christianity.

However the tale of the creation of Brigid's Cross is somewhat confused, and there are various versions, one story goes like so:

"There was an old pagan Chieftain who lay delirious on his deathbed in Kildare (some tales say this was her father) and his servants summoned Brigid to his beside in the hope that the holy woman may calm his restless spirit. Brigid is said to have sat by his bed, consoling and calming him and it is here that she picked up the rushes from the floor and began weaving them into the distinctive cross pattern. Whilst she weaved, she explained the meaning of the cross to the sick Chieftain. It is thought her calming words brought peace to his soul; he was so enamoured by her words that the old Chieftain requested he be baptised as a Christian just before his passing.

Since that day, and for the centuries that followed, it has been customary on the eve of her Feast Day (1st February) for the Irish people to fashion a St. Brigid's Cross of straw or rushes and place it inside the house over the door."

Email ThisBlogThis!Share to TwitterShare to FacebookShare to Pinterest
Labels: Brigid