Concept of a Legend 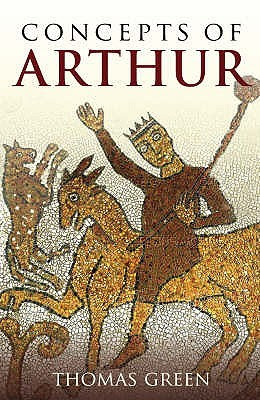 This is a detailed study of the origins of Arthur and the nature and development of the early Arthurian legend under the former nom de plume of Caitlin R. Green.

Here Green argues for a concept of Arthur as a figure of legend, not history.

At first glance both texts appear to present a concept of Arthur that is historical. The History of the Britons contains a complete section (usually referred to as Chapter 56) which presents Arthur as a leader of battles, not a king, and lists twelve successful conflicts culminating in the Battle of Badon, also referenced in a contemporary source, De Excidio Britanniae of AD 540 (although Gildas does not mention Arthur by name). Green sees the History of the Britons as presenting a concept of Arthur as a warrior who fought against Germanic invaders in the late 5th century.

Green suggests the History of the Britons could simply represent a mythical or folkloric figure drawn into history and far from being a 'heap', as descibed in the prologue of Nennius, sees the text as a carefully constructed work in ‘Biblical style’ with explicit political aims expressly written for Merfyn, King of Gwynedd 829-30 AD.

The Badon entry in the Welsh Annals is clearly influenced by Arthur's eighth battle at Guinnon in chapter 56 of the The History of the Britons. Whereas, the battle of Camlann, Green sees as a creation of the mid to late 10th century, and treated very differently by the ‘guardians of Welsh tradition’ possessing an 'Otherworldy' context and just one of several legendary versions of Arthur’s demise circulating in early medieval Wales.

Green concludes that the The History of the Britons is of dubious historical value and questions the confidence we can hold in its Arthurian reference, seeing the text as part of the process of historicizing a legend.

This an important work in the search for Arthur in which Green examines the earliest level of the Arthurian legend prior to Geoffrey of Monmouth, unravelling the world of a superhero battling monstrous supernatural beasts, witches and giants.


Concepts of Arthur
Table of Contents:

From May 2017, Concepts of Arthur has been unavailable in all editions for well over a year and the rights have now reverted to the author who has made the original 2007 version of the book available as a free PDF download on her website: Dr Caitlin R. Green Arthuriana: Studies in Early Medieval History & Legend