Arthur in the Celtic Languages

There are many books that focus on the Arthurian legend in literature, but three books featuring collections of essays by leading authorities in the field show the development of scholarship over the last seventy years should be held in every enthusiast's collection.


Arthurian Literature in the Middle Ages: A Collaborative History (Clarendon Press, 1959)
edited by Roger Sherman Loomis. Includes important essays such as The Arthury of History (KH Jackson), Arthur in Early Welsh Verse (KH Jackson), The Legend of Arthur's Survival (RS Loomis), other chapters,  as the title suggests, concentrated on the development of Arthurian Medieval Literature.

The Arthur of the Welsh presents a collection of essays focusing on the Arthurian literature produced in Wales, in both Welsh and Latin, during the Middle Ages, with chapters on the ‘historical’ Arthur (Thomas Charles-Edwards), Arthur in early Welsh verse (Patrick Sims-Williams), the Merlin legend (A. O. H. Jarman), the tales of Culhwch ac Olwen (Brynley F. Roberts). Other chapters investigate the evidence for the growth of the Arthurian theme in the Triads and in the Historia Regum Britanniae of Geoffrey of Monmouth, and discuss the Breton connection and the gradual transmission of the legend to the non-Celtic world.

In January 2019 UWP published the latest book in Arthurian Literature in the Middle Ages series;

Arthur in the Celtic Languages: The Arthurian Legend in Celtic Literatures and Traditions edited by Ceridwen Lloyd-Morgan and Erich Poppe. 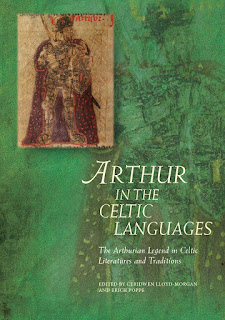 This is the first comprehensive authoritative survey of Arthurian literature and traditions in the Celtic languages of Welsh, Cornish, Breton, Irish and Scottish Gaelic. With contributions by leading and emerging specialists in the field, the volume traces the development of the legends that grew up around Arthur and have been constantly reworked and adapted from the Middle Ages to the twentieth century.

It shows how the figure of Arthur evolved from the leader of a warband in early medieval north Britain to a king whose court becomes the starting-point for knightly adventures, and how characters and tales are reimagined, reshaped and reinterpreted according to local circumstances, traditions and preoccupations at different periods.

From the celebrated early Welsh poetry and prose tales to less familiar modern Breton and Cornish fiction, from medieval Irish adaptations of the legend to the Gaelic ballads of Scotland, Arthur in the Celtic Languages provides an indispensable, up-to-date guide of a vast and complex body of Arthurian material, and to recent research and criticism.

‘This long-awaited successor to The Arthur of the Welsh is the first-ever survey of Arthurian material across all the Celtic languages from the Middle Ages to modern times. A significant contribution to the field of Arthurian studies in general, it will prove an indispensable resource for those working with material in the Celtic languages.’ - Professor Sioned Davies, Chair of Welsh, Cardiff University