St Brigid
Brigid personifies the remarkable survival of a pagan Goddess into the 21st century. Born in the mid-5th Century as daughter of a Druid she developed into a Goddess yet today, the 1st February, she is celebrated as Saint Brigid, patron to many including blacksmiths, boatmen, cattle farmers, held in such high esteem in Ireland She is second only to Saint Patrick. In the Celtic calendar it is Imbolc and marks the start of the light half of the year when days begins to lengthen and grow warmer. It is a favourite time of the year when nature awakes after the long dormant dark days of winter; bulbs are starting to come into flower, buds are ready to burst on trees and shrubs.

The night before, St Brigid's Eve, 31st January, corn dollies known as the Brideog (little Brigid) would be made by young girls and unmarried women, adorned with ribbons. They would all gather in one house and stay all night with the Brideog. The following day the Brideog would be carried through the neighbourhood, calling at house to house, where the girls would receive offerings such as food or coins. Households would leave a piece of cloth outside for Brigid to bless as she walked the earth. In the morning the cloths are brought inside and believed to possess powers of healing and protection recived from the Goddess. St Brigid Crosses would be manufactured from rushes and placed above the door on the outside of the house to provide protection from fire and evil. 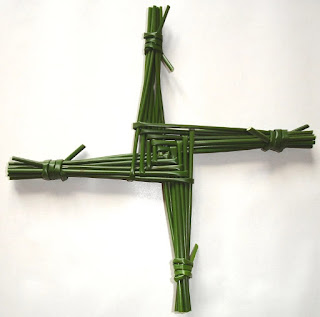 We find Brigid sites predominantly in Ireland but also across the British Isles from the many churches dedicated to Her, but also ancient burial chambers such as the Bridestones on the Staffordshire-Cheshire border. But one of the most peculiar stories associated with a St Brigid site is at Bride’s Well near Glastonbury in Somerset.

This land between The River Brue and Wearyall is known as Beckery, granted to Glastonbury Abbey by the Saxon king Cenwealdh in 670AD. Debate continues to the origin of the name; it may be derived from the Old English name for ‘Bee-keeper’s Island’ (Beocere) or from the Gaelic for ‘Little Ireland’ (Becc-Eriu). The later explanation fits well with the story of St Brigid at Glastonbury a tradition that the Saint stayed at Beckery for a short period and left relics behind. A stone marks the site of Bride’s Well and  a gentle rise is named Bride’s Mound.

Archaeological excavation has uncovered a Chapel at Beckery with evidence indicating a monastic community lived there. Arthurian legend claims King Arthur visited the chapel at Beckery after experiencing a recurring dream while staying at a nunnery on Wearyall. At the chapel he met the Virgin and Child, an encounter which led to the change of his coat of arms as described in the account of King Arthur’s eighth battle at Guinnion from the Historia Brittonum.

The Blue Bowl
However, the strangest story associated with Beckery is a mysterious blue glass bowl found in Bride’s Well, which some have described as the true Grail of Glastonbury.

Dr. John Arthur Goodchild qualified as a medical practitioner in 1873 and started his practice in Cannes, France. In 1877 Goodchild moved his practice to Bordighera in Italy. It is here he purchased a blue glass bowl and platter in 1885. He took these to a glass specialist at the British Museum in London who was puzzled by the techniques used in the manufacture and their origin but thought it was indeed very ancient. He took them to his father’s house at Hampstead and locked them away in a cupboard where they remained for the next ten years.

Goodchild had a strong interest in spirituality and religion and believed that the Divine was feminine and the West would witness a spiritual revival led a woman, or group of women. This was published in his book “The Light of the West” (1898).

A year earlier in 1897 Goodchild had a psychic experience while in Paris. He found himself paralysed, unable to move he heard a voice which informed him that Jesus had actually owned the bowl, still in his father’s cupboard. The voice told Goodchild to take the blue bowl to Bride’s Hill, Glastonbury, but not until after his father’s death. The objective was, he was told, for the bowl to pass into the possession of a woman when new spiritual truths were to be revealed.

Shortly after, on his return to Bordighera, Goodchild received news that his father had died. He returned to England in 1898. The platter he passed on a family in Italy but kept the bowl which he duly took to Glastonbury. He followed the instructions received in the vision and placed the blue glass bowl in a muddy pond at Glastonbury. This was a lost well near the rising ground at Beckery known today at Bride’s Mound. He returned to Hampstead and told no one of what he had done.


Goodchild journeyed back to the pond at Glastonbury every year between 1899-1906, except 1905, and was convinced the blue bowl was no longer there but never checked the location where he had hid it in a hollow under a rock. He stayed in the town trying to pick up on any local news of such a discovery. He visited the pond to find the spring there had a reputation as a healing well and visitors had tied pieces of material to the nearby trees and bushes containing prayers. He noticed one tied to a Holy Thorn tree there was from one Katherine “Kitty” Tudor Pole.

In August 1906 Goodchild experienced a vision of a sword floating in the eastern sky. He didn’t understand its meaning and simply made a note of it. Then in early September he experienced a vision of a cup suspended in the western sky. He felt compelled to send a drawing of the sword to his friend Wellesley Tudor Pole, brother of Kitty, in Bristol and simply asked that it be passed on to the two pilgrims who had recently visited the well. It is not clear how Goodchild knew about the "two pilgrims" but his information was correct.

He received no further communications from the voice he had heard in Paris and was not aware that other people were starting to receive psychic messages about the blue glass bowl.

In 1902 Wellesley Tudor Pole, a young man from Weston-super-Mare in Somerset, experienced visions while ill in which he saw himself as a monk at Glastonbury. Believing that a pre-Christian culture from Ireland had spread to Glastonbury he became convinced, around 1904, that he needed to move to Glastonbury believing he would find a sacred object. He believed that the discovery would require the assistance of three maidens.

Wellesley duly passed on Goodchild’s message to Janet and Christine Allen, friends of the Tudor Poles, who had recently been to Glastonbury. Later in September they visited Goodchild in Bath and revealed how their friend  Wellesley had received a psychic message saying that they should go to a well at Glastonbury and search the waters for something. They had actually visited Glastonbury some two or three weeks before this meeting with Goodchild, around the same time he had received his visions of the sword and cup.  On the occasion of their visit to Glastonbury Janet and Christine had searched the well at Beckery and found the blue bowl in the well at Bride’s Mound, Beckery, but sensing the great sacredness of the object they placed it back in the muddy waters. On returning to Bristol they told Wellesley what had happened.

Wellesley and Kitty visited Goodchild in Bath later that month, 29th September, and he explained the whole story of the blue glass bowl. On 1st October Kitty went to Beckery and removed the bowl from the well, and with Goodchild’s consent, took it to a shrine in her family home in Bristol. They were convinced that they had found the Holy Grail. 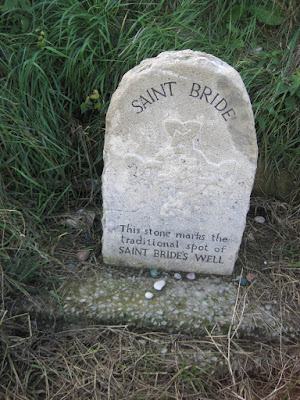 Today at Beckery a stone showing the cross of St Brigid marks the place where the blue bowl was found at Bride’s Well. The blue glass bowl is now held by the Trustees of Chalice Well at Glastonbury, a charity founded by Wellesley Tudor Pole in 1959.

The debate has rattled on for centuries. Did King Arthur really exist or was the legend of the British leader, Camelot and the Knights of the Round Table simply that - a legend?
North Yorkshire author Alistair Hall embarked on a historical detective trail to try to find out. Convinced Arthur was real, he believes his new book The Battle of Mount Badon: Ambrosius, Arthur and the defence of Britain holds the answers to one of history’s greatest puzzles.
Full Story:
Yorkshire Post 18 February 2020