The A39 road from Street to Glastonbury crosses the River Brue at Pomparles Bridge following an artificial “Causeway” through the Somerset marsh. It is here, according John Leland antiquary to Henry VIII, that King Arthur's sword Excalibur was cast into the water as he crossed to the Isle of Avalon after being mortally wounded at the battle of Camlan. The name of the bridge is said to have derived from the French pont perilleux, or “perilous bridge.” 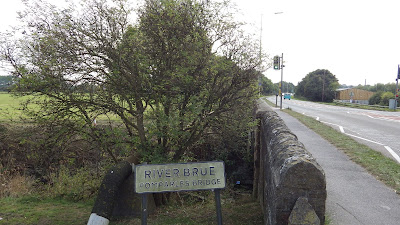 The first stone bridge was constructed in the 12th century to transport local Blue Lias stone from quarries at Street to rebuild the Abbey at Glastonbury after the fire of 1184. In 1881 while drains were being laid in the fields to the east of this Causeway a long forgotten ancient road was discovered running parallel to it at a distance of 50 or 60 yards. Local antiquarian John Morland observed massive horizontal oak beams and deeply-sunk oak piles just south of the river, which he considered to be the southern causeway onto the peninsula of probable Roman origin as suggested by the name Street, from the Latin 'strata' for a paved road. Roman pottery was recovered from beneath the structure and a 12th -13th century spur from the road surface. 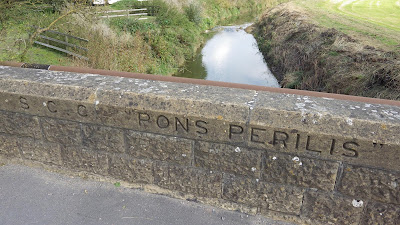 However, carbon dating suggests that construction of the Causeway took place between 650 AD and 780 AD. From the date of Pomparles Bridge it is concluded that a Medieval causeway, connecting Street with Glastonbury island, replaced an earlier causeway crossing the Brue at the North end.

The earliest known name for the settlement at Street was “Lantokay” meaning the sacred enclosure of the Celtic saint Kea. The parish churchyard is on the first flood-free ground near the river Brue and considered one of the oldest churches in Somerset. The oval form of the large churchyard suggests a “llan” a sacred enclosure typical of an early 6th century construction surrounded by marshland.

Situated southwest of Glastonbury, below the ridge of Wearyall Hill, is a small mound known today as “Bride's Mound” where the remains of an ancient chapel have been found. Both Beckery Chapel and Street church stand 10m above sea level, significantly it would seem, at each end of the ancient causeway.

It is claimed that Brigid left relics here when she returned to Ireland; her purse, collar, bell and weaving instruments. Stories tell of Gildas making a bell for Brigid at her request, although it is not necessarily identified as the bell she left at Beckery. The Life of St Kea states he also received a bell from Gildas before he left Somerset for Cornwall.

In the early 20th century a Glastonbury man purchased a wooden box in local sale which was found to contain a small bell wrapped in linen. He took the bell to the British Museum where experts described it as an ancient Celtic bell. In the 1920s the bell passed to the man's great niece who lent it to Alice Buckton who was impressed by the possibility that it may have belonged to St Brigid. In 1907 Buckton became interested in the spiritual and creative movements in Glastonbury after meeting Wellesley Tudor Pole, an occultist and visionary. In 1913 Buckton purchased Glastonbury's Tor House from the Missionaries of the Sacred Heart of Jesus and transformed the old schoolhouse and former inn into “The Chalice Well”.  Dion Fortune, perhaps the most important figure in the revival of occultism in Britain, stayed here with Buckton and wrote about her in her book “Avalon of the Heart”. Buckton used the bell in ceremonies at Chalice Well but after her death in 1944 its whereabouts are unknown.

Today this area is known as “Beckery” from the earliest recorded name of Beckeria. The area has been variously known as “Bride's Hay”, “Bride's Hill” or “Bridget's Island”. However, the etymology of Beckery has caused much debate over the years. Both William of Malmesbury and John of Glastonbury call it “Beckeria, which is called Little Ireland”. Modern scholars accept this meaning giving the origin of the name as “Becc-Eriu” from the Irish “Little Ireland”. Yet, not all agree and suggest an English origin derived from the Old English “beocere” and “eg” meaning simply bee-keeper's island.

In deciding which of these derivations may be correct we need to consider why Brigid would come to Beckery. It is argued that Brigid came to visit St Patrick at Glastonbury who the Abbey claims as its own and was buried there; there is certainly a strong argument that Patrick may have been born in Somerset before being taken to Ireland by raiders. A strong Irish presence is known to have existed at Glastonbury, indeed the biographer of St Dunstan, known simply as “B”, claims that Dunstan was educated by Irish monks in the 10th century. In addition, Glastonbury sat conveniently on the pilgrimage route from Ireland to Rome.

Beth Frances makes the suggestion that monks from Wexford in south-east Ireland may have fled to Glastonbury following attacks by Vikings on their monastery. Beggerin (or Beggery) Island near Loch Garman harbour (Wexford town) shares a number of commonalties with Beckery. Frances states both are sites of early Christian monasteries, both are on islands in marshy areas but with access to important river routes and the coast.

On a mound at Beggerin is a small 13th century stone chapel surrounded by a graveyard. This island is thought to be a monastic settlement founded by St Ibar in the late 5th century. The monastery was raided by Vikings in 819/821 and closed during the middle of the 12th century. Ibar was a bishop working in Ireland around the same time as St Patrick and came into conflict over who should be the leader of the church in Ireland. However, legends associated with Beggerin Island in Wexford, appear to be as muddled as those attached to Beckery.

In the 5th century the area around Wexford was apparently under the control of the clan Ui Bairrche and their neighbours the Fortharta. St Brigid was from the Kildare section of the Fortharta, where she founded her community at “the sacred place of the oak tree” (Cill Dara). Reports claim that a very old oak tree grew on the island at Beckery. An island in Loch Garman was known as Oak Island.

There is ample evidence of an Irish presence in south-west Wales during the 5th century, such as the Déisi. Brigid may have travelled from the Loch Garman area and arrived in south-west Wales where there is a church dedicated to the saint in the Pembrokeshire village of St Brides, the traditional spot for her arrival in Britain. It is claimed by some that she may have established a convent at St Brides, the remains of which can be seen on either side of the driveway to St Brides castle. The church as St Brides dates from the 13th century replacing an earlier chapel and cemetery that stood closer to the sea and has now been eroded away.

At Brean on the Somerset coast there is another church dedicated to St Brigid, also dated to the 13th century, but the dedication to the Irish saint suggests a possible early Celtic Christian settlement. The isolation of the church and the presence of a sacred spring coupled with its association with Brigid supports an early foundation. About a mile from the church is what appears to be a Dark Age cemetery, dated to about 650 AD, although possibly not connected to the church.

Frances suggests that Irish monks fleeing to Britain to escape the Viking raids at Wexford in the 9th century may account for the dedication of these churches to the Irish saint, bringing with them the memory of the name of their “Little Ireland” and providing an explanation for the Irish monks who educated St Dunstan at Glastonbury.

Yet the question remains unanswered as to whether these Irish monks came to Somerset because of the Glastonbury associations with St Patrick and St Brigid, or if the monks brought tales of these saints with them?