King Arthur: A Life in Landscape

Following in the Footsteps of King Arthur
by Andrew Beattie
published by Pen & Sword History, 2020 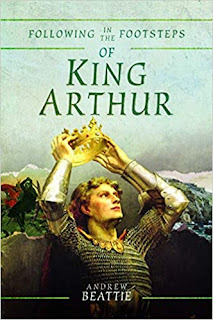 "The story of King Arthur is one of the best known in English history: he was the boy who was schooled by Merlin and who claimed his right to lead the Britons against the Saxons by drawing a sword from a stone; later, he was the warrior who congregated with his knights around a Round Table and who was given a magical sword, Excalibur, by the Lady of the Lake. These stories have been told and re-told hundreds of times - and over the centuries the actual figure of Arthur has retreated into obscurity, with many scholars suggesting that he was a mythical figure who never actually existed. Arthur has been the subject of thousands of books; yet this one tells his story in a way that is wholly new - through the places where the events surrounding his life supposedly unfolded.

From Tintagel Castle in Cornwall, Arthur's reputed place of birth, to Slaughterbridge in the same county, one of the contenders for the location of his final battle against the Saxons, and from Cadbury Castle in Somerset, one of the numerous claimants to be the site of Arthur's fort of Camelot, to Glastonbury, where in 1191 his grave was reputedly discovered by local monks, the trail through some of England's most historic places throws a whole new light on this most compelling of legends." [from the Back Cover]

Andrew Beattie is an established author who writes cultural-historical titles including books on the series “Cities of the Imagination” and “Landscapes of the Imagination” stretching from Cairo to the Scottish Highlands. This is his second book for Pen & Sword; the first being “Following in the Footsteps of the Princes in the Tower” (2019). He also writes plays for children with his play “Arthur: Boy-King of Britain” performed by schools and youth groups in the UK, the USA and Australia. The author’s experience behind the pen makes this a joy to read unlike some pseudo-historical reconstructions of King Arthur’s empire by self-published authors.

The book is structured in to three parts; firstly the author examines the legend of King Arthur from its origins in the period AD 500-800, through the French chroniclers and Thomas Malory, to the 20th century. Refreshingly Beattie offers no fanciful reconstructions of who Arthur might have been and concentrates on the development of the legend through the ages. 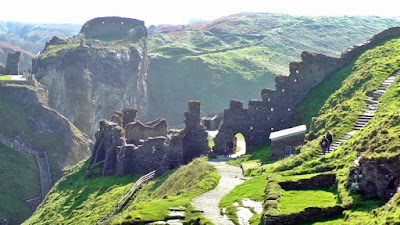 Part Two is split into three chapters and forms the main body of the book, dealing firstly with the conception and birth of Arthur. This chapter centres on Tintagel, identified as the place of Arthur’s conception through Merlin’s magic by Geoffrey of Monmouth. The author looks at the castle constructed by Richard of Cornwall in the 13th century which he claims was purposefully made to look much older. Beattie then looks at the village of Tintagel and King Arthur’s Great Halls of Chivalry.

The second chapter titled the Quest for Camelot examines the potential sites for Arthur’s court at Winchester, Caerleon, Caerwent and Cadbury Castle. Beattie starts with the earliest accounts of Arthur’s base at Celliwig as recorded in the tale of Culhwch and Olwen on to Camelot in early Arthurian literature and its first appearance in the works of Chretien de Troyes. In writing of Arthur’s court at Winchester as defined by Thomas Malory, Beattie looks in detail at the Winchester Round Table, still to be seen today hanging on the wall of the Great Hall. In examining the south Wales sites of Caerleon and Caerwent the author eyes the Roman remains as being influential on later Arthurian writers from Malory onwards. Beattie closes this chapter by taking us to the ancient Somerset hillfort known as South Cadbury Castle, first identified as Camelot in the 16th century by John Leland, antiquary to King Henry VIII. 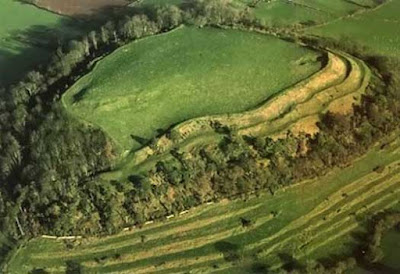 Excavations by the Camelot Research Committee from 1966-70 led by Professor Leslie Alcock revealed the defensive structure was refortified in the late 5th or early 6th century; the classic Arthurian period. Since the 16th century an area on the plateau was known as “Arthur’s Palace”; here Alcock found evidence of a large Dark Age hall. Alcock was convinced Arthur was a historical figure, a belief that can be seen in his 1971 book “Arthur’s Britain”. In later life he distanced himself from this viewpoint and claimed there was no evidence for Arthur’s existence. Interest in the hillfort at Cadbury has waned with Alcock’s change of heart but it is still worth a visit today, if not for its Arthurian associations then for its impressive setting and huge ramparts.

Predictably the final chapter of Part Two deals with Camlann and Avalon and is appropriately titled The End of Arthur. Beattie starts his ending with looking at Arthur’s final battle according to Geoffrey of Monmouth. Geoffrey located this battle in Cornwall and the author takes us to Camelford and Slaughterbridge. Geoffrey had brought Arthur to life at Tintagel and has the king depart from his mortal existence only a few miles away; it seems his tale had turned full circle and ended back at the geographical beginning. There is little doubt that the large inscribed stone lying on the bank of the River Camel has influenced this view, indeed it is known as “Arthur’s Stone” and said to mark the site of the king’s grave. 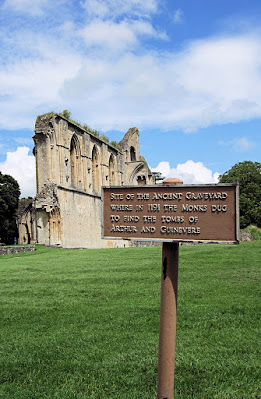 After moving on to Dozmary Pool on Bodmin Moor, said to be where Arthur’s sword Excalibur was returned to the Lady of the Lake after the final battle at Camlann, we come to Glastonbury. Beattie spends some pages on the claimed site of Arthur’s tomb at Glastonbury Abbey, discovered by the monks in 1191. Of course it is not possible to write of Glastonbury without mentioning the legend of Joseph of Arimathea and the Holy Grail.

Finally, Part Three is a 25-page gazetteer of Arthurian sites.

It must be admitted that Beattie’s book concentrates on Arthurian sites in the south of England, certainly the key sites he discusses are all south of the M4 motorway, well except Caerleon and Caerwent which are just a cock-stride north of it, which will certainly not please advocates of a Northern Arthur.

However, the sites listed in this book are well worth a visit, read it before you go or take a copy with you, it will certainly enhance your experience.