Book Review: The Battles of King Arthur by Tony Sullivan 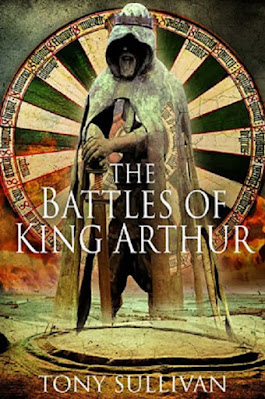 This is Tony Sullivan’s second Arthurian book from publisher Pen & Sword, the first outing being King Arthur: Man or Myth? (2020) an investigation of the evidence for King Arthur based on the earliest written sources, weighing the possibility of Arthur as an historical figure or purely a creation of fiction.

Many recent works by a new generation of authors has become tedious in their pursuit of identifying a specific person in a particular location as the legendary king. This is fuelled by the limited reliable information available and the vagueness of Arthur’s battles as recorded in the ninth century Historia Brittonum allowing poetic licence to run a mock.

Refreshingly, KingArthur: Man or Myth? examined a list of possible suspects without bias toward identify a particular figure as King Arthur and is therefore the best starting point for anyone new to Arthurian studies.

The Battles of King Arthur continues with the author’s unbiased approach, focusing on Arthur’s battles in the Historia Brittonum, but making two assumptions: firstly that Arthur was a historical figure; and secondly, that this battle list is genuine. Not all will agree with these assumptions as this is a contentious subject, but these assumptions are essential for a study of Arthur’s battles; otherwise the page remains pretty much blank.

Tied to these two assumptions the author sets out the case for the most likely locations of Arthur’s battles using archaeological evidence and historical sources to place Arthur and his battles in the correct political, cultural and military context. To this end the book focuses on three broad hypotheses: firstly, that there is a reasonable amount of evidence to estimate the political, cultural and military context; secondly, some of Arthur’s battles can be located on the balance of probabilities; and finally, the proposed locations will make sense in the context of the political and military situation and the archaeological and literary evidence.

We start with a brief look at historical events leading up to the time when Arthur fought, from Roman Britain to Post-Roman Britain AD410-450. Next we move on to examine the Anglo Saxons, investigating the archaeological and literary evidence to understand the Germanic migration and the possible meaning of Gildas’s “partition” before examining how regional polities evolved from civitas to Kingdoms. It quickly becomes clear that this was a far more complex picture than what we are often told; it seems there is not one single scenario that comfortably fits all.

Using contemporary accounts of fifth and sixth century battles (such as Y Gododdin for example) the next chapter on weapons and warfare sets the scene for how these battles must have been fought discussing sizes of armies, battle formations and tactics.

The author acknowledges that having laid out the historical background in great detail, a complex picture has emerged. A fragmenting political and civilian structure in addition to changes in cultural identities across a range of different groups: aristocratic elites; townsfolk; peasants; military and mercenary groups; and a heterogeneous group of Germanic settlers. Into this pressure cooker of economic, religious and social frictions he places Arthur within a time-frame of c.450-520.

We now move to the climax of the book, Chapter 7, The Thirteen Battles of Arthur, a solid forty pages. Here the author discusses all twelve battles from the Historia Brittonum with the addition of Arthur’s apparent final battle at Camlann from the Annals Cambriae. Each battle is discussed in depth in turn with a map to show the location as identified against the balance of probabilities. The locations of Arthur’s battles is another contentious issue, and not everyone will agree with these conclusions, yet Tony Sullivan provides the best fit for a historical Arthur in the context of the timeframe.

This is weighty volume, packed with detailed information, but the author’s writing style makes for a very easy read that moves on at a fair pace. This is an important addition to the Arthurian debate and so refreshing when the genre is polluted these days with whacky theories claiming to identify King Arthur as whoever you like.

In The Battles of King Arthur author Tony Sullivan has taken popular Arthurian studies to a new level. Highly recommended.

Copy received from the publisher in return for posting a review without obligation.