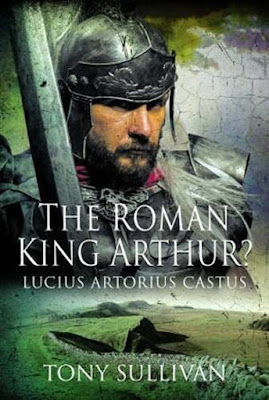 There are many theories as to the true identity of the legendary King Arthur, most preserve the fifth to sixth century Post Roman era, but can be located in all geographic locations across the UK and sometimes beyond. One popular theory places the origin of Arthur way out of the normal time frame by several hundred years, and places him in Roman Britain. This theory proposed that the Arthur of the Post-Roman period (c.480-520) has his origin in a Roman Officer named Lucius Artorius Castus stationed in Britain in the late second or early third century.

The connection was first suggested nearly a hundred years ago by Kemp Malone in 1924, based largely on the etymology of the Latin name 'Artorius' which could certainly evolve into 'Arthur' in Welsh. As the only known figure in Britain of this name it is unsurprising that Lucius Artorius Castus should attract attention.

The theory was advanced by Helmut Nickel in the 1970s who suggested that Artorius was the original Arthur and that a group of Sarmatian cavalry posted to Roman Britain in the late second century serving under him inspired the tales of the Knights of the Round Table.

C Scott Littleton, along with Anne C Thomas and later Linda Malcor, expanded this further, arguing that in addition to Artorius being in contact with these Sarmatians, many elements of the Arthurian legend actually derive from Caucasian mythology, which the Sarmatians brought to Britain in the second century, finding parallels for key features of the Arthurian legend such as the Sword in the Stone, the Holy Grail, and the return of Arthur's sword to a lake. This has become known as the Sarmatian Connection.

I have no problem with a historical Arthur being Roman, Welsh, Scottish or whatever; I do however hold issue with speculative theories without evidence to support their claims to identify the true King Arthur. Lets see how Lucius Artorius Castus does under the scrutiny of Tony Sullivan.

In The Roman King Arthur? author Tony Sullivan provides the first historical study detailing the military and civilian career of Lucius Artorius Castus and investigates the links claimed by proponents of the Artorius - Arthur theory:

In the first chapter the author commences his investigation by examining the two inscriptions on the funerary stones from the Roman province of Dalmatia, in modern Croatia, discovered in the nineteenth century; the first from a sarcophagus was discovered in the wall of a churchyard, the other nearby. Both the stones are eroded and broken leading to much debate about the exact lettering.

The first inscription details the career history of Lucius Artorius Castus and forms the essence of the 'Artorius - Arthur' theory, indeed a full and interesting military career in its own merit. But, as Tony Sullivan point out, there is not a single reference to Artorius from our Roman sources from the second to the fifth centuries. It appears that all the evidence we have for Artorius is on the two memorial stones from Croatia and possibly a third inscription on a ring.

Tony Sullivan dissects the inscription in forensic detail and provides clear definitions, explaining the debate over Artorius’s adversaries as either ‘Armenia’, ‘Armatos’ or ‘Armorica’ and discusses possible timeframes, which is critical for the correct interpretation.

For many years the missing letters were interpreted as giving AMORICANOS (Brittany) suggesting that Castus led Legions from Britain to Gaul in an attempt to fit the campaign to the Gallic Campaign of King Arthur in Geoffrey of Monmouth's Historia regum Britanniae, c.1136. This has now been discredited as there was no major campaign in Amoricanos in our timeframe and the word does not appear on any other known Roman inscription. Historians now favour ARMENIANS as Castus’s enemy. If the inscription refers to the The Roman–Parthian War of 161–166 it has a devastating impact on the Artorius = Arthur theory, in other words, Castus had left Britain before the Sarmatians arrived in AD 175. Therefore proponents of the theory now opt for ‘ARMATOS’ as the missing word, meaning ‘armed men’ which could mean any armed adversary in just about any country

From this scant career history on a tombstone in Croatia fantastic stories have developed claiming Artortius led a force of Sarmatian knights in the north of Britain in response to Cassius Dio's commentary on the northern tribes crossing Hadrian's Wall and slaying a general (AD 180-184). This episode has been used in an imaginative reconstruction of Castus and his Sarmatian knights fighting along The Wall to provide an original account of the Arthurian battle list in the ninth century Historia Britonnum [See: Malcor, Heroic Age 1999b, & Appendix to From Scythia to Camelot, Revised Edition, 2000], when all we know from Dio is the northern tribes crossed the Wall - he certainly does not describe a series of battles. When something is just too fantastic to be true it usually isn't.

The dating of Castus’s posting to Britain now becomes critical; as we have seen above for the Arthorius-Arthur theory to work, they have claimed he was in Britain during 181-184, the time of the uprising of the northern tribes according to Cassius Dio.

Supporters of the Artorius – Arthur theory claim that in 181 Castus was sent to Britain as praefectus of an auxiliary unit stationed at Brementennacum (Ribchester, Lancashire) where there is evidence for Samatian cavalry in the third century.  Yet, the longer inscription shows quite clearly that Castus was actually ‘prefect of legion VI Victrix’ and does NOT mention Brementennacum. He was undoubtedly camp prefect at York where legion VI Victrix was stationed.

Supporters of the Artorius – Arthur theory then claim that in 185 Castus was appointed Dux (Duci) , a term they consider equivalent to governor of Britain, and led three legions against the ARMATOS (armed men). The following year he was Procurator of Liburnia where he finished his military career.

Much significance is placed on the word 'Duci' on the inscription, the dative form of ‘dux’, in a further attempt to link to Arthur who was of course described in the Historia Brittonum as 'Dux Bellorum' (leader of battles). Duci was a temporary position held by Castus to lead three legions (or more likely parts of) from Britain (probably to Armenia) and there is absolutely no reason to link this position to the title given to Arthur in the ninth century.

He provides four options for dating the period the three legions were led from Britain by Lucius Artorius Castus :

1. The Armenian campaign of AD 161-6
2. Campaign against mutineers in Britain or Gaul AD 184-7
3. The civil war between Clodius Albinus and Septimus Severus AD 197
4. The Armenia campaign of Caracalla AD 215.

The first option is the one most widely accepted by the majority of historians (see Higham, 2018:135) who see Castus stationed in Britain c.160 - which means he had left Britain many years before the Sarmatians had arrived in AD 175.

Surprisingly, Tony Sullivan opts for a late date seeing Castus into the third century, but credits Higham’s early timeline as probably the most likely.

Chapter 2 recaps on the Arthurian legend from the ninth century Historia Brittonum, Saints' Lives,  through the twelfth century and Geoffrey of Monmouth, to later French Romances and Welsh Tradition.

The next chapter looks at Artorius's place in the history of Rome between AD 150-250, discussing ranks and responsibilities, before providing an overview of Roman Britain. At the end of this chapter (Table 9) the author provides an analytical assessment of the Artorius - Arthury theory; out of 13 points of the theory only 3 provide any possible evidence for the points mentioned above; the rest are negative indicators with no evidence. This is quite a persuasive result leaving the reader little alternative than to agree with the author's conclusion that the theory has performed very poorly against the evidence and should be rejected.

The Sarmatians are examined next to find evidence of their contact with Artorius. Again, summarised in a table at the end of the chapter there seems to be a distinct lack of evidence for the 5,500 Sarmatians bringing their families with them to Britain in AD 175 (totalling 20,000 people) and certainly no evidence of Artorius leading a Sarmatian cavalry unit.

It is claimed that the tales of the Narts have been handed down orally through many centuries, but were not written down until the nineteenth century. Alarm bells should now be ringing! The theory claims these tales can be traced back to Sarmatians in the second century. Tony Sullivan says that we are asked to compare these legends with the Arthurian legends, themselves written down 600 years or more after any historical Arthur could have lived, which is of course several hundred years before the Nart Sagas were written down. The historical Arthur of the ninth century bears little resemblance to the Arthur of the Romances written down from the twelfth and thirteenth centuries; to attempt to link the Nart Sagas back to this is just not credible.

However, first and foremost, it must be demonstrable that there is a direct link between Artorius and the Sarmatians and the Arthurian legends must also be traceable back to the second century Sarmatians. Further, the later legends and tales which evolved between our earliest Arthurian reference in the ninth century to the later middle ages must possess a link back to the Roman era. And we should have something linking Artorius in the second century to a Post-Roman leader of battles named Arthur of the fifth/sixth century. Tony Sullivan is unable to present any evidence these can be traced back to the Sarmatians or influenced Arthurian legend.

Conclusion
In The Roman King Arthur? author Tony Sullivan presents a convincing case that the Artorius - Arthur theory does not stand up to scrutiny; there is nothing linking the second century Roman officer named Artorius to a Post-Roman Arthur as recorded in the ninth century, or to the Arthurian legends written down from the twelfth-thirteenth centuries and concludes that there is no Sarmatian Connection; it is a modern myth.

The Roman King Arthur? is a fascinating, comprehensive and important contribution to the Arthurian debate.

Copy received from the publisher in return for posting a review without obligation.