The Quest for the Holy Grail

In the early 1890’s Sir Edward Burn-Jones designed a series of tapestries illustrating the Quest for the Holy Grail. These were produced in collaboration with William Morris and some of them are now in he care of Birmingham Museum and Art Gallery.

For conservation reasons the tapestries are only exhibited occasionally but are on show as from today, 22nd November 2008, until February 2009.

This sequence of tapestries was originally designed for William Knox D'Arcy, for the dining room of his house, Stanmore Hall, Middlesex. It was the most extensive decoration scheme that the firm of Morris & Co completed. A set of ten were designed by Edward Burne-Jones, who produced the figurative designs and based the costumes loosely on those of the twelfth century, John Henry Dearle, who designed decorative detail, and William Morris, who designed the heraldry. Several further versions were woven later, although the entire series was only repeated once, for D'Arcy's business partner, George McCulloch, in 1898-99. Birmingham's version of 'The Summons' is from the series produced for George McCulloch.

The subject matter is based on the 15th century Thomas Malory’s Le Morte D'Arthur. It tells the story of the spiritual quest by King Arthur's knights of the round table for the Holy Grail, the vessel from which Jesus and the disciples drank at the Last Supper.

Here the first scene of the story shows the damsel arriving at court and summoning the knights to the quest. King Arthur holds a gold staff and wears a crown. Sir Lancelot, also wearing a crown, is seated on the left. The other knights are Sir Bors, Sir Kay, Sir Lamorah, Sir Gawaine, Sir Palomedes, Sir Perceval, and Sir Hector de Marys. Sir Galahad, who is Sir Lancelot’s son, and the only knight worthy of attaining the Holy Grail, is yet to arrive. He is represented by the empty chair, draped with a cloth bearing a Latin inscription and known as the ‘Siege Perilous’.

Panel 2 - The Arming and Departure of the Knights 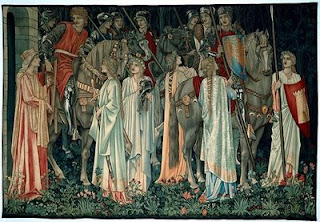 The second scene depicts the virgin ladies of King Arthur's Court assisting the knights in preparation for their quest. On the far left, Queen Guinevere hands Sir Lancelot his shield, in an allusion to their adulterous relationship, the cause of Sir Lancelot's impending failure. Sir Gawaine, who will also fail in the quest, appears mounted on the right of the picture, identified by his shield, which bears a double-headed eagle.

Panel 3 - The Failure of Sir Gawaine;
Sir Gawaine and Sir Uwaine at the Ruined Chapel 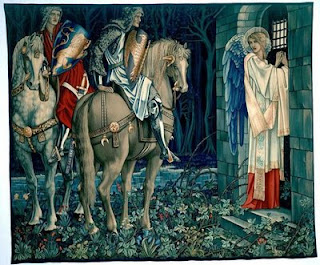 Here the third scene depicts two knights who failed in their quest because they had previously led sinful lives. The story told how after many days of riding they stopped to rest and pray at a deserted chapel, but were told that they could not enter. Sir Uwaine is shown on the left, and Sir Gawaine is nearest the angel, who is barring the entrance to the chapel. A brilliant light shines from within, suggesting the presence of the Holy Grail. 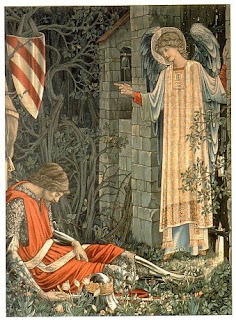 The fourth scene depicts Lancelot's failure to attain the Holy Grail. In Le Morte d'Arthur, Lancelot is unworthy of the Holy Grail, for according to Christain tradition he has allowed human perfection in the form of Guenevere to supplant the image of God. Burne-Jones departs from Malory's text and Lancelot is shown sleeping outside a chapel wherein the presence of the Grail is again suggested by the emission of the brilliant light through the door to which entry is forbidden by the presence of an angelic figure. This tapestry is not in Birmingham's collection.

This design links the figurative scenes together. The story tells how the knights travelled by ship for part of their journey to Sarras, where the Holy Grail was to be discovered.
Ships were often used in medieval stories as important narrative devices, to transport characters from one scene or world to another. Burne-Jones drew studies for this design using scale models.

Panel 6 - The Attainment; The Vision of the Holy Grail
to Sir Galahad, Sir Bors and Sir Percival

The final scene shows the three successful knights. The relative purity of each knight's life is represented by their distance from the Holy Grail, which sits on the altar inside the chapel. Sir Galahad kneels in the doorway surrounded by white lilies, symbolising his purity. On the left are Sir Bors and Sir Perceval.
Three standing angels hold symbols of Christ's passion, including the bleeding lance of Longinus, the Roman soldier who pierced his side on the cross. Above the Holy Grail is a Pentecostal wind, symbolising the presence of the Holy Spirit.

Verdure with Deer and Shields 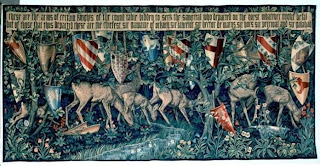 A verdure is a type of tapestry that represents plants or wooded landscapes, sometimes with birds or animals. They were produced in Northern Europe from the Middle Ages to the 18th century. Verdure tapestries were originally designed to hang beneath each of the first four narrative scenes in the dining room at Stanmore Hall. Each had an inscription, which described the subject above it. The design for this Verdure was adapted by J H Dearle in 1900, from Burne-Jones's design for the original one which hung below The Summons.
BIRMINGHAM MUSEUM & ART GALLERY
Chamberlain Square
Birmingham
B3 3DH