Legend has it that there was once a temple to Lludd at the site of St Paul's Cathedral, London, near Ludgate, one of the City's seven ancient gates. 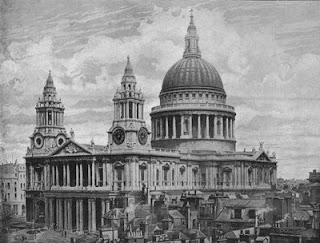 Lludd Llaw Eraint
"Lludd of the Silver Hand", son of Beli Mawr, is a legendary hero from Welsh mythology. As Nudd Llaw Eraint (the earlier form of his name, cognate of the Irish Nuada Airgetlám, derived from the pre-Roman British god Nodens) he is the father of Gwynn ap Nudd, lord of the Otherworld and leader of the Wild Hunt.

In the early Welsh Genealogies most early British Kings claim descent from Beli Mawr (the Great). Beli was said to be have been the husband of Anna (Anu), which Christianised legend equates with the daughter of St. Joseph of Arimathea.

Beli Mawr has been identified with the Celtic God, Belinos, his name means 'shining' or 'bright’, who has more surviving inscriptions than any other Celtic God, across northern Italy and southern Gaul and traces of a cult in Britain; the Celtic festival Beltane may be named after him. Belinos has been equated with Apollo. Beli, in addition to being father to Lludd, was also father of Avallach, whose abode was the otherworldly island which was the precursor of Avalon. He is therefore King of the Otherworld although in some later literature, he is replaced by his nephew Gwyn ap Nudd as King of Avalon.

In the Triads of Britain, Afallach was also the father to nine maidens, goddesses who tended the cauldron, the chief treasure of Annwfn. The early Arthurian poem, the Spoils of Annwfn (Preiddeu Annwfn) portrays a raid on the otherworld by Arthur and his companions for the sacred cauldron of the chief of Annwfn. This is similar to one of the tasks set in Culwch and Olwen in which Arthur must attain the cauldron of the giant Diwrnach on a raid to an otherworld island.

Skene in The Four Ancient Books of Wales notes that these do not all appear to be sons of the same Beli. In Welsh tradition from the Children of Don, Beli Mawr, consort of Don, have seven sons who are all euhemerised gods:

The Lesser Prophesy of Britain continues,

In the alliance of the sovereign’s servants, Llyminawg will appear Who will be an ambitious man, To subdue Mona, And to ruin Gwynedd, From its extremity to its centre.

Lleminawg is a character who also appears in another poem from the Book of Taliesin "The Spoils of Annwn," where he has a flaming sword, plunged into the cauldron of Annwfn. He also accompanies Arthur in "Culhwch and Olwen" portraying further similarities between the two works as noted above. [1]

Is it not the cauldron of the Chief of Annwn which is social? With a ridge round its edge of pearls, It will not boil the food of a coward nor of one excommunicated. A sword bright flashing to him will be brought, And left in the hand of Llyminawg.
– [The Spoils of Annwn]

Lludd Llaw Eraint appears only in Culwch and Olwen, therefore his absence from Welsh literature indicates he is probably not the sole source of Geoffrey of Monmouth's King Lud from his History of the Kings of Britain. Geoffrey using his name to incorrectly explain the naming of London, as he did with Brutus and the naming of Britain. The tale of Lud rebuilding London and being named after him as Caerlud appears only in Geoffrey’s work and subsequently the Bruts that followed it. 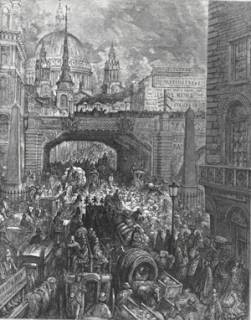 Geoffrey, however, my have been following an oral tradition as Henry of Huntingdon, writing prior to Geoffrey’s History of the Kings of Britain, tells us in his Historia Anglorum that the leader of the British army against the Romans was 'Belinus, the brother of King Cassibelaun, and the son of Lud, a very brave king who had gained possession of many islands of the sea by the success of his arms'. [2]
Geoffrey had already used Belinus and Brennius as brothers fighting a Roman campaign in the 4th century BC, so he used the name Heli as the king who ruled Britain and had three sons, Lludd, Caswallawn and Nyniaw. When Heli died Lludd ruled prosperously, re-building London and calling it Caer Lludd. Lud no doubt was a humanised deity, ultimately derived from Nodens; According to legend, there was once a temple to Lludd at the site of St Paul's Cathedral, London, near Ludgate, one of London's seven ancient gates, which is allegedly named after him but the derivation of the name is uncertain. Upon the death of Lud, the younger brother Caswallawn (Cassibellaunus) becomes king. Lud’s sons Androgeus and Tenvantius are not yet of age so are made Duke of Trinovantum (London), and Duke of Cornwall respectively. 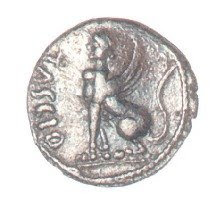 Tenvantius is known historically as Tasciovanus and reigned for the last two decades BC over the Catuvellauni, North of the Thames. Tasciovanus is known to us only from his coins from that period not from literature, and yet his name turns up in a corrupted from centuries later. [3] This has led some to argue as evidence of a lost source for Geoffrey of Monmouth’s work but more likely confirms an oral tradition which became confused through the course of time.
However, Caswallawn we know as an historical character that did actually fight against the Romans. Cassivellaunus was a historical British chieftain who led the defence against Julius Caesar's second expedition to Britain in 54 BC. He appears in Julius Caesar's Commentaries on the Gallic War, although he does not name the tribe, he states that Cassivellaunus’ territory is north of the River Thames, which correlates with the area later inhabited by the Catuvellauni.

Cassivellaunus must have been a powerful ruler in his time, according to Caesar he had been at constant war with other British tribes, overthrowing the king of the most powerful tribe in Britain at the time; the Trinovantes. Despite Cassivellaunus's guerrilla tactics, relying on knowledge of the local terrain within his territory and the speed of his chariots, Caesar still managed to advance to the Thames. The only fordable point was defended and fortified with sharp stakes, but the Romans managed to cross. Bede, The Ecclesiastical History of the English Nation, c.731 mentions the spikes in the Thames; apparently they were still visible in his time, and were encased in lead.

Cassivellaunus appears as Caswallawn son of Beli Mawr, in later Welsh literature; the Triads of Britain, he appears in the second and third Branches of the Mabinogi, and Welsh versions of Geoffrey's Historia (Bruts). He is referenced frequently in the Triads; usually referring to a tradition about Caswallawn not drawn from either Roman nor existing medieval sources. His horse, Meinlas (Slender Gray) is mentioned in the Triads as one of the Three Bestowed Horses of the Island of Britain. The Triads call the decision to allow the Romans to land in Britain in exchange for Meinlas one of the Three Unfortunate Counsels of the Island of Britain. The Triads also state that Caswallawn left Britain with 21,000 men in pursuit of Caesar and never returned. [4]

There is even less of Lud in Welsh Literature, but like Caswallawn his tales do appear in the Mabinogion and the Triads of the Island of Britain. In Triad 36, Lud and Caswallawn seem to become confused:

36. Three Oppressions that came to this island and not one of them went back [5]

It is the general consensus that Lludd should replace his brother Caswallawn in this Triad, all other manuscripts concur in line with the independent Welsh tale Lludd a Llefelys. However, this possibility cannot be ruled out, Caswallawn appears in the previous Triad 35. [6] He also appears in other Triads with a character called Lleu in one Triad as one of the Three Golden Shoemakers of the Island of Britain.

The Mabinogion anthology compiled by Lady Charlotte Gueste in the 19th century includes the independent Welsh tale of Lludd and Llefelys which does not appear in Geoffrey of Monmouth's Historia but is subsequently inserted in the thirteenth century Welsh version, Brut y Brenhinedd.

1 R. S. Loomis theorized that he is a form of Lugh Lamhfada, and influenced the figure of Lancelot.
2 Rachel Bromwich, (2006). Trioedd Ynys Prydein: The Triads of the Island of Britain.
3 Geoffrey Ashe, Mythology of the British Isles, p 133.
4 In The Triads of the Island of Britain (2006) Rachel Bromwich suggests the fragmentary allusions to Caswallawn in the Triads may relate to a lost narrative, this may have been a Welsh romance similar to the independent tales included in the Mabinogion, detailing the king's adventures, which would have been largely free of influence by the classical accounts.
5 "Oppression" is translated from the word “gormes”, which may be "oppression" but implies invasion/conquering by an alien race.
6 Rachel Bromwich, ibid. In the notes to Triad 36, Rachel Bromwich expresses caution in following all other manuscripts that agree in restoring Lludd mab Beli, in place of Caswallawn, to conform with the tale of Lludd a Llefelys, as she states we have no assurance that that an earlier version of the story of the coming of this gormes (alien race) was not associated with Caswallawn rather than his brother. It may be significant that Caswallawn also appears in the preceding Triad 35. As Cassivellaunus of history he is also mentioned in Julius Caesar's De Bello Gallico v.11, where he is said to be the commander of the British resistance against the invading Romans.