Return of the King

The Sleep of Arthur in Avalon – Edward Burne-Jones

“Some men yet say that King Arthur is not dead,
......and men say that he will come again”

Edward Burne-Jones last and greatest work The Sleep of Arthur in Avalon has come home and returns to Britain for exhibition at the Tate Britain, London for a limited period only, from April 2008 to February 2009. Burne-Jones spent 17 years on the canvas and he was still painting it on the day before his death in June 1898.

Following the artist's death the painting with its magnificent frame with Latin inscription passed to a neighbour of Burne-Jones's whose descendents, John and Penryn Monck, sold the work at Christie's on 26 April 1963. Even at a time when Victorian art was unfashionable, the sale was considered a significant loss to Britain.

Tragically, Burne-Jones last work was allowed to leave Britain in 1963 after being sold at auction when the Tate had the opportunity to buy it for £1,000. It was purchased for the Museo de Arte de Ponce in Puerto Rico by the island's governor and founder of the museum, Don Luis Ferré, in 1963.

This enormous painting, measuring 21ft by 10ft, is being loaned to Tate Britain with Frederic Leighton's masterpiece Flaming June (1895) from the Museo de Arte de Ponce, Puerto Rico, while its galleries undergo a major renovation and expansion programme during 2008.

The subject of the painting is taken from the fifteenth century work Thomas Malory’s Le Morte d’Arthur, Book 21, Chapters 5 and 6. Mortally wounded in the Battle of Camlann, Arthur is taken way to the isle of Avalon and tended by Morgan and her sisters, where he would enter a dream like sleep until summoned again.

Burne-Jones painting shows the King laid out in a cloister, capped by a canopy embossed with panels showing the story of the Holy Grail, three queens keeping vigil; Morgan le Fay in white; the queens of Northgallis and the Wastelands by his feet. In the foreground, playing instruments, are Nimue (The Lady of the Lake), the queens of Sothian Orkney, Eastland and the Outer Isles. Amazons hold the kings’ armour, while Watchers look out into the distance ready to raise the alarm should the King awake.

If you appreciate fine Arthurian art see it now while you can - it returns for a limited period only, you will not be disappointed. 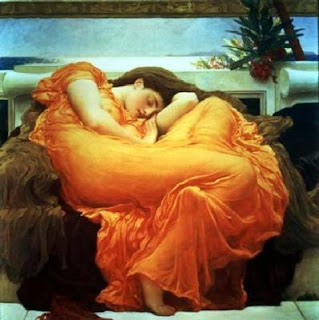 Also on loan from the Museo de Arte de Ponce, Puerto Rico, Flaming June, was last shown in the UK in 1996 and has become an iconic work in Puerto Rico. The picture was one of the artist's final works and shows a woman in a state of total relaxation, with brilliant orange drapery stretched across her body, as she sleeps in the heat of the Mediterranean sun.


The theme of sleep and its associations with death and unconsciousness was important to both Leighton and Burne-Jones, and has additional resonance in these two works that were painted towards the end of the artists' lives. 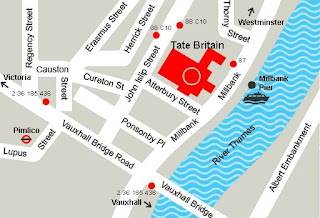