Recent developments at our historic sites has revealed that English Heritage appear to be in two  minds about protection of our historical sites. In many cases they carry out essential conservation work but can never resist the opportunity to add a little something with a commercial interest.

EH claim the generous support of many donors has enabled them to have embarked on the largest conservation program in their history which will be carried out on an unprecedented scale.

This includes a series of new projects such as work to improve the visitor experience at sites along Hadrian's Wall, including the Roman forts at Corbridge and Birdoswald, plus essential maintenance to the medieval fortress at Dover.

Maintaining Authenticity?
Quoting their “Vision and Values” EH claims to “offer a hands-on experience that will inspire and entertain people of all ages. Our work is informed by enduring values of authenticity, quality, imagination, responsibility and fun. Our vision is that people will experience the story of England where it really happened.”

“We seek to be true to the story of the places and artefacts that we look after and present.  We don't exaggerate or make things up for entertainment's sake. Instead, through careful research, we separate fact from fiction and bring fascinating truth to light.”

Evidence of this work can be seen with the recent improvement works at Stonehenge which bears witness to this statement with the closure and grassing over of the A344 road in an effort to return the monument back to perhaps something like its original setting.

But what of the great brass arrow laid in the ground by the Heelstone at Stonehenge in 2013, just to remind us of the solstice alignment of the monument? Authentic?

This is clearly not the case at Tintagel either where creeping commercialisation has led to the carving of Merlin's face on the rock face outside Merlin's cave; a tale that can only be traced back as far as Tennyson. This sculpture was commissioned by EH with the promise of more to come at the island. Authentic?

Surely the Merlin sculpture is in direct contradiction of EH's "Vision and Values" statement:

" We don't exaggerate or make things up for entertainment's sake. Instead, through careful research, we separate fact from fiction and bring fascinating truth to light."

This is hardly separating fact from fiction, in fact it is quite the opposite and exploiting fiction!

In another generation or two when the Merlin sculpture will be weathered and nicely faded, looking ancient perhaps, guides will be telling visitors that we don't know the origin of the sculpture on the rocks. We must question why EH is creating an Arthurian presence at Tintagel when there is none outside the fables of Geoffrey of Monmouth.

Contrasting Principles?
And this is clearly not the case at Old Oswestry Hillfort where EH has given approval to the Shropshire councillors decision to open its ancient landscape to development and the building of new houses that will destroy the historic setting forever.

On  17th December 2015 Shropshire Council voted unanimously to adopt the local plan known as SAMDev for development of the site, termed OSW004, a nationally criticised site for 117 houses in the setting of Old Oswestry hillfort destroying the eastern landscape.

Built during the Iron Age the multiple rampart hillfort of Old Oswestry (Hen Dinas) encloses a central area of 8.4 hectares, abandoned after a thousand years, it was incorporated into the earthwork known as Wat's Dyke.

EH describes the ramparts of Old Oswestry as “among the most impressive of any British hillfort” and “…one of the greatest archaeological monuments of the nation”. But apparently not great enough to prevent EH signing up to Shropshire Council's development of site of OSW004. And now that they have gained a foothold with OSWOO4 being given the green light by the Council, the developers’ agents have already started the process to develop the other areas such as OSW005, OSW006 and OSW007. Sceptics might link this apparent show of support to the fact that Old Oswestry makes no money for EH as entry to the fort is free.

EH now charge a whopping £14.50 for the Stonehenge visitor experience, the only stone circle site in England where you have to pay for entry. This is by far their biggest attraction and earner; witness the continuous coach loads of tourists arriving at the site day after day.

Only two days ago (25th February) it was announced that the World Heritage Site (WHS) of Ironbridge in Shropshire is to receive £1.25m English Heritage funding for essential maintenance work. So clearly there is money available in the EH coffers.

An Opportunity for EH
Here's a suggestion for EH; instead of paying for permanent Merlin sculptures and ruining the authenticity of Tintagel forever why not put the money to better use and save Bede's World, which would cost a fraction of the £1.25M allocated for Ironbridge.

Bede's World is a museum in Jarrow dedicated to Anglo-Saxon culture and the life and times of the monk and historian the Venerable Bede who lived at the twin monastery of Saint Peter and Saint Paul, Wearmouth and Jarrow.

In 674 King Ecgfrith of Northumbria granted land for a monastery. He provided a large estate for St Peter’s, Wearmouth, and then in 681 granted land for St Paul’s at Jarrow. The twin monastery is thought to have once owned much of the land between the rivers Tyne and Wear and during the 7th and 8th centuries was one of Europe’s most influential centres of learning and culture

Bede entered St Peter’s in about 680 at the age of seven, and spent his life in the twin monastery which he described as “one monastery in two places”.  Here Bede wrote his famous Ecclesiastical History of the English People (731 AD). Bede died in 735 and was buried at St Paul's. In the 1020s bones thought to be Bede’s remains were taken from Jarrow to Durham Cathedral.

Part of the Anglo-Saxon monastery survives today as the chancel of the St Paul’s church, constructed with stones taken from the nearby Roman fort of Arbeia and Hadrian's Wall at Wallsend. The monastery was re-established in the 11th century and survived until the Dissolution when St. Paul's became the Parish Church. The remains of the medieval monastery that can be seen adjoining St Paul’s church today, adjacent to Bede's World, are listed as a Scheduled Ancient Monument and in the care of English Heritage. 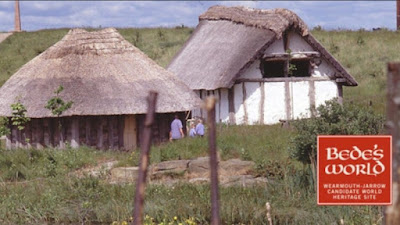 The Board of Trustees of Bede's World took the decision to cease operation from Friday 12 February 2016 due to a lack of funds.

So here is an opportunity for English Heritage to step in and show they are genuine guardians of our national heritage and save Bede's World.