Dozmary Pool: Nothing but Waves...

“On either side of the road the country stretched interminably into space. No trees, no lanes, no cluster of cottages or hamlet, but mile upon mile of bleak moorland, dark and untraversed, rolling like a desert land to some unseen horizon. No human being could live in this wasted country.” - Mary Yelland's description of Bodmin Moor, from Daphne du Maurier's novel Jamaica Inn.

The Lady of the Lake
Following the battle of Camlann, King Arthur and his loyal knight Bedivere arrive at the shore of a pool of water. Grievously wounded Arthur awaits for a barge to arrive to ferry him to Avalon, he commands Bedivere to return his sword Excalibur to the Lady of the Lake. 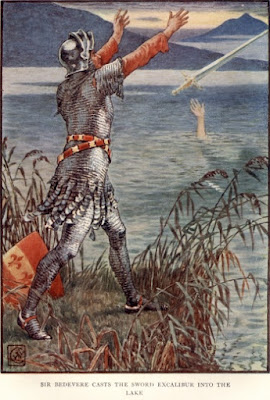 But Bedivere could not bring himself to throw such a magical sword into the water and hid Excalibur under a tree. He returned to the king who asked him what he saw. Bedivere said he saw nothing but “waves and wind”. Knowing Bedivere was lying the king commanded him to return to the lake and do as he commanded. Again, Bedivere could not waste such a noble sword, and hid it once more.

Again Arthur asked him what he saw. Bedivere said he saw nothing but the “waters wap and waves wan.” King Arthur questioned how such a noble knight could betray him twice? Once more the king  ordered the knight to go the waters edge and throw the sword into the lake.

Finally Bedivere “threw the sword as far into the water as he might; and there came an arm and an hand above the water and met it, and caught it, and so shook it thrice and brandished, and then vanished away the hand with the sword in the water. So Sir Bedivere came again to the King, and told him what he saw.”

Bedivere took the King to the water's edge where a “barge arrived with many fair ladies in it, and among them all was a queen, and all they had black hoods, and all they wept and shrieked when they saw King Arthur.” Arthur was then taken into the vale of Avilion to heal of his grievous wounds.
- Thomas Malory, Le Morte D’Arthur, Book XXI, Chapter V. 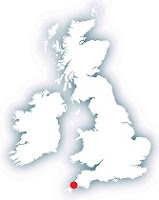 Many lakes have been cited as the place where King Arthur's sword Excalibur was thrown to the Lady of the Lake. Dozmary Pool high on the wild, remote and desolate Bodmin Moor in Cornwall, just 10 miles from the sea, is one such site; this is an atmospheric spot on the Cornish Moor, often described as isolated and eerie. In the dim light of evening as the sun goes down it is easy to imagine many things at Dozmary Pool.

Local tales claim that Excalibur rests at the bottom of this pool. According to the local lore, after breaking the sword drawn from the stone, it is here that Merlin and Arthur rowed out on the water and received a sword held above the water by a hand and arm clad in white. According to Malory, the Lady of the Lake appeared calling to them to row out and collect it. And mortally wounded, Arthur was to return the weapon to the water Goddess. The motif has clear Celtic undertones, as attested by the votive deposits found in many lakes across north-western Europe.

No one knows when Dozymary Pool became associated with the Arthurian legend; it is often omitted from Arthurian works such as Mike Ashley's Mammoth Book of King Arthur (Robinson, 2005) and more recently the Matthews' The Complete King Arthur (Inner Traditions, 2017) but features strongly in local Cornish books. Yet the nearest Camlann battle site is some 10 miles distant at Slaughter Bridge, Camelford, a further 5 miles west lies the famed Arthurian Tintagel Castle.

Dozmary Pool is a small lake, barely 500 yards across, a mile in circumference, once said to be bottomless, but is in fact only 4 feet deep. Other tales claim it is linked underground to Falmouth Harbour. The saucer like depression on the moor has its origins in the post-glacial period, providing an important record of vegetation since the last Ice Age; consequently in 1951 the pool and surrounding area was designated a Site of Special Scientific Interest (SSI).

The pool outflows into Colliford Lake and as such one of the sources of the River Fowey. However, since the construction of the Colliford reservoir on Bodmin Moor, its importance as a water source has declined.

Ghosts and Smugglers
The pool is just over a mile from the famous Jaimaca Inn at Bolventor, midway between Launceston and Bodmin where the A30 crosses the Moor. The coaching Inn, built in 1750, was made famous by Daphne du Maurier's novel of the same name featuring smugglers and wreckers who lured ships toward the rugged Cornish coast by lighting beacons on the shore.

Ships that strayed on to the rocks had their cargo looted by the wreckers, brought ashore and then stashed at the Inn. It is said that half the brandy smuggled into Britain was landed along the Cornish and Devon coasts. Smuggled rum from the Caribbean was no doubt also stored at the Inn, however it is said to be named after the local Trelawney family, who served as Governors of Jamaica during the 18th century. Today the Inn is home to the Smugglers Museum which features the story of the wreckers and smugglers over the past 300 years.

Dozmary Pool is also well known for the tale of Jan Tregeagle who was charged by the spirits for his misdemeanours and sentenced to bail out Dozmary with a leaking limpet shell. Tortured by the endless futility of the task, Treageagle escaped to Roche Rock before being set another task, weaving ropes from the sand of Gwenor Cove. At the end of his life, he was damned to the bottomless Dozmary Pool, where his soul is tormented to this day; it is said that Tregeagle's ghost can still be heard howling across the moor.

If you are travelling to Cornwall you must visit Dozmary, leave the A30 at Bolventor and park opposite Jamaica Inn for a short walk to the pool. Follow the lane opposite the Inn signed for Dozmary Pool and walk down the path for about a mile or so to the shore. It is possible to walk around the pool on the shore line and partially on tracks but some ground can be very marshy.

It's all just legend of course.

Yet in the late summer of 2017, a schoolgirl pulled a mysterious 4ft long sword from Dozmary Pool.

A medieval sword pulled from the very same lake that King Arthur's legendary sword Excalibur is said to have been thrown into; could the legend be true?

Unfortunately the sword is thought to be only about 20 or 30 years old and probably deposited during a modern pagan ritual.