On the Trail of the Dragons of Emrys 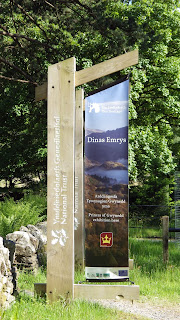 The Legend of Dinas Emrys
Dinas Emrys  (the fortress of Ambrose) is a rocky outcrop 250 feet above Llyn Dinas in the Nantgwynant valley.  According to legend, this is the site that the tyrant Vortigern chose to build his fortress but it kept collapsing leading to the first literary appearance of the young Merlin (Myrddin in Welsh) as the boy Ambrose. This is said to be where the white dragon of England fought and lost to the red dragon of Wales.

“Fleeing Anglo-Saxon invaders Vortigen came to Wales and chose the hillfort as his retreat. However all efforts at building on the site failed, with workers returning daily to find collapsed masonry. Vortigern was counselled to seek the help of a young boy born of a virgin mother; a suitable boy was found named Myrddin Emrys (Merlin Ambrosius). Vortigern’s plan to kill Myrddin to appease the supernatural powers preventing him from building his fortress was scorned by Myrddin who instead explained that the fort could not stand due to a hidden pool containing two dragons. The White Dragon – he explained – of the Saxons would in time be defeated by the British Red Dragon. After Vortigern’s downfall the fort was given to Emrys Wledig (Ambrosius Aurelianus) from which it takes its name.”

The story of 'Lludd and  Lleflys' from the Mabinogion tells how Lludd captured the dragons in a vat containing ale. The dragons were buried at the safest place in Britain that later became known as Dinas Emrys.

Another legend tells of Myrddin's treasure hidden in a cave at Dinas Emrys.


Archaeology of Dinas Emrys
Today little remains above ground, however n 1910 and 1954-56 archaeologists excavated the site of Llywelyn's castle at Dinas Emrys and have identified several periods of habitation; the earliest dating to perhaps the 1st or 2nd century. They also found the cellar of the castle and the foundations of the tower. A cistern inside the structure has been identified which may have been the hidden pool and have some connection with the legendary tale of Vortigern and the dragons.

From the information board at the Craflwyn centre:

"Dinas Emrys commands a strategic position in the valley of Nantgwynant, one of the main routes through Snowonia. A hillfort once stood on the site, shown today by an impressive gateway and stone ramparts around the summit. Excavations have revealed that Dinas Emrys was occupied from the late Roman period (3rd-4th centuries AD) until the 6th century. Pottery from the eastern Mediterranean and southern France has also been found there.

"Other evidence shows this was an important site for many centuries. A medieval cistern supplied valuable fresh water to the hillfort's inhabitants, and plays an important part in the Dinas Emrys legend. On the rocky outcrop's summit, the stone base of a 12th-century tower survives. Traditionally associated with Llywelyn the Great, it was probably built by one of his feuding rivals before Llywelyn secured the kingdon in 1201.

"Charcoal in the tower's base suggests it may have been burnt down deliberately, possibly by Llywelyn, as a 13th-century poem implies. the tower may have been built of stone, or partly of timber; we do not know its height. These reconstructions are based on the archaeological evidence we do have, including other castles built by Llywelyn.

"In 1201 Llywelyn granted the Nantgwynant Valley, including Dinas Emrys, to the Cistercian monks of Aberconwy Abbey. The valley became a monastic grange, and land divisions today still reflect these ancient boundaries."

The Gwyedd Princes
The Gwynedd Princes Project traces the Welsh Princes from Maelgwn Gwynedd to Llywelyn the Great across 30 heritage sites in North Wales, from the castles the princes built to the royal courts where they ruled, to tell the unique story of the longest and most successful dynasty in medieval Wales.

The project was launched in October 2013 at Dinas Emrys visitor centre at Craflwyn, beneath the hillfort, near the Snowdonia village of Beddgelert, said to be named after Gelert, Llywelyn's favourite dog.


On the Trail of the Two Dragons
There is an excellent walk to the summit of Dinas Emrys with breath-taking views of Snowdonia.

Park at the National Trust car park at the Craflwyn centre one mile north of Beddgelert  on the A498. The Sherpa Bus Service goes also through Nantgwynant.

Although a short walk, less than 2.5 miles, it is described as 'moderate' - there is a short scramble toward the summit over mossy rocks that can be very slippery when wet.