South Cadbury Castle
South Cadbury Castle is one of the most impressive multivallate hillforts in Britain, constructed on an isolated and steeply scarped limestone hill, standing 500ft on the Somerset-Dorset border. The hillfort occupies an enclosure of around eighteen acres, defended by four massive ramparts and ditches. The hillfort has a long and complex history as an archaeological site and has attracted much Arthurian folklore over the years. Yet, regardless of the name there has never been a castle here in the medieval sense. 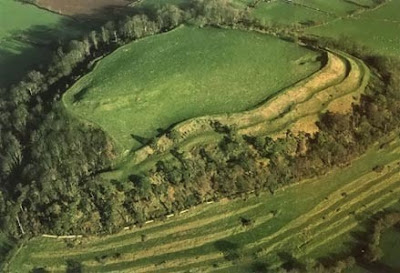 The main path leads steeply up from South Cadbury village There is another less used path  coming up from Sutton Montis to the south-west and a third arrives from the east with difficult access. The enclosure rises steeply to a summit ridge with a long plateau, providing long views across the flat Somerset plain, with the distinctive Glastonbury Tor on the horizon about 12 miles distant. Oddly, when looking from the Tor, the hillfort at South Cadbury is very difficult to identify.

There is some Bronze Age evidence at Cadbury but the pre-Roman Iron Age saw a surge in activity with the construction of the huge ramparts and the establishment of a substantial settlement in the enclosure. Roman activity at the site was detected in the excavation of barracks and a ‘shrine’ or ‘temple’ on the hill-top. With the development of the Roman town at nearby Ilchester usage of the hillfort significantly declined.

Resettlement took place during the Post-Roman period with substantial re-fortification of the hillfort from c. 470 AD until some time after 580, the classic Arthurian period. In the 11th century it temporarily housed a late Saxon mint with coins stamped accordingly with identifying marks. 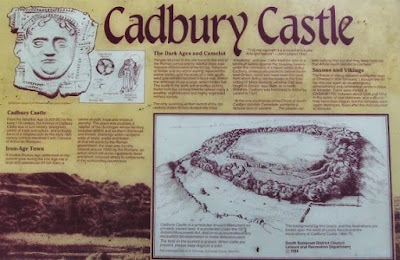 The Folklore
The belief that Cadbury Castle was King Arthur's court, known as Camelot in Arthurian Romance,  can be traced back to John Leland in the 16th century. A number of folkloric tales relating to Arthur have subsequently developed at Cadbury over the centuries following Leland's visit, including the sleeping king and the leader of the Wild Hunt on several tracks past the hillfort.

The earliest extant account is that of John Leland in 1542:

“At South Cadbryi standith Camallate, sumtyme a famose toun or castelle. The people can telle nothing ther but they have hard say that Arture much resorted to Camalat” [Leland - Itinerary 1535–43]

Although Leland implies the local people knew nothing of the Arthurian tradition of the hillfort he seems to have heard more than this and notes a tale of a silver horseshoe and of Roman coins found on the summit and fields at the base.

Later antiquarians, such as Camden (1586) and Stukeley (1724), tend to repeat Leland without adding much, although Stukeley included finds of slingshots, Roman utensils and the ruins of arches and hypocausts, but related that local people were unaware of the name of 'Camelot' for the site, but knew it as ‘Arthur’s Palace’ or ‘Cadbury Castle’.

Accordingly, it can be argued, and it has been, that Leland invented the Arthurian tradition at Cadbury; there are certainly no Arthurian associations with Cadbury to be found in the earliest Welsh traditions of the legend. We cannot, therefore, rule out the possibility of the name ‘Arthur’s Palace’ may have developed among local people following Leland’s claim that the hillfort was indeed Camelot.

However, the itineraries of Edward I and Edward III, who visited Cadbury on route to Glastonbury in 1278 and 1331 respectively, may be evidence that a connection between the hillfort and Arthur was extant as early as the 13th century.

Other local traditions, with no connection to Leland, has named one of the two wells on the hillside as 'King Arthur's Well'. It is claimed that at the other 'Queen Anne's Well' you can hear a cover slammed on 'King Arthur's Well'. This is part of the lore that claims Cadbury is a hollow hill; rumours persist of a large cavern with iron, or sometimes golden, gates, where if you arrive at the right moment you might glimpse King Arthur inside guarding fairy treasure. 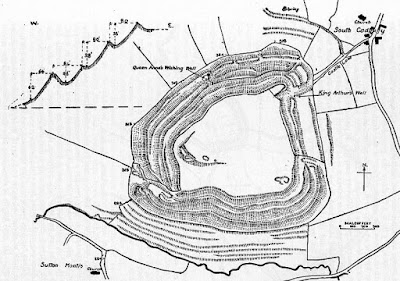 Excavations carried out by Reverend James Bennett, the rector of South Cadbury, toward the end of the 19th century records that when he opened a 'hut dwelling' on the plain of the hill he found a flagstone at the bottom which, according to his workman, covered a manhole which led into the cave. The position of this hut is not recorded.

The Welsh chronicler Elis Gruffydd, (1490–1552), noted another Arthurian tradition in the area which may have been a reference to Cadbury Castle; “And yet they [the English] talk more about him [Arthur] than we [the Welsh] do; for they say and firmly believe that he will rise again to be king. They in their opinion say that he is asleep in a cave under a hill near Glastonbury.”

The 'sleeping king in a cave under a hill' is a popular folktale that many sites claim but seems to have exceptional longevity at Cadbury. A well-known tale asserts that some early archaeologists were affronted by an elderly local man who asked them if they had come to dig up the king. Geoffrey Ashe argues that the connection between Cadbury Castle and the cave legend is the earliest recorded tale to refer to Arthur as a sleeping king in England.

Other local lore suggests Arthur was not always restrained within the hill but on certain occasions he could be seen riding by. The Wild Hunt is a common narrative across Northern Europe, usually featuring the Norse god Odin, but on occasion Arthur leads a spectral group riding across the sky on moonlit nights.

Tina Paphitis (2013) claims there are three variants of this tale extant at Cadbury Castle, in each case Arthur is the leader of the Hunt. In one version, Arthur and his knights gallop around the hill on horses shod with silver, and stop off to water their mounts at King Arthur’s Well. This version may have its roots with Leland who claimed a silver horseshoe was found at Cadbury Castle ‘within the memory of man’; or conversely, this may have formed the basis of Leland's tale.

Stukeley (1724) records another local tale that, on winter nights, Arthur and his Otherworldy troop ride along 'King Arthur’s Lane' or 'Hunting Causeway' to Glastonbury, almost 12 miles distant. A local labourer working on the 19th century Bennett excavations at Cadbury claimed to have heard the king and his hounds pass by on the Causeway on his way home one night.

It was during Bennett's excavations in the 1890's on the western side of the hill that a pit containing the skeletons of boys and men bundled together in a hasty mass grave was unearthed. The Somerset river Cam flows not far from here, conjectured as a possible site for Arthur's last battle of Camlann.

The third variant of the Wild Hunt tale at Cadbury Castle tells how Arthur and his knights ride down to the village of Sutton Montis, immediately south-west of the hillfort, on Christmas Eve and drink water from the well by the village church.

The Archaeology
Fuelled by this wealth of tradition held by the local people in 1965 The Camelot Research Committee was assembled to investigate the possibility that an Arthur-type figure, a Post-Roman warlord, was once resident at the hillfort at South Cadbury Castle.

Co-founder and secretary of the committee, Geoffrey Ashe was firmly of the opinion that Arthur is best defined as the British general who won the battle of Badon and argues that he was a real individual identified as a military commander, not a king.

The archaeological excavations began in the summer of 1966 with Leslie Alcock appointed as field director. This was followed by excavations every summer thereafter until 1970 with a short final season in April 1973.

At the end of the 1969 season Alcock interpreted a timber slot as part of a 5th or 6th century hall and evidence was found at the south-west gate which showed a sequence from the Iron Age to fortification of a Late Saxon mint; coins marked 'CADANBYRIG' have been dated to the reign of Æthelred the Unready (d.1016 AD). In between these terminal points, the south-west gate revealed evidence of several violent events around the time of the Roman invasion.

Alcock established one of the most complete ceramic sequences for the Late Bronze Age-pre-Roman Iron Age in Britain. The hillfort was refortified during the Post-Roman period, the classic Arthurian period. He also found evidence for a wall which had been built in the 6th century and the ramparts were strengthened with large quantities of dressed masonry from derelict Roman buildings and mounted by raised wooden walkways. The large timber building, 63 feet by 34, was interpreted as evidence of a powerful chieftain's hall which occupied the part of the hillfort enclosure known locally as 'King Arthur's Palace'; from pottery finds it has been dated to the 5th/6th centuries. Then the hillfort was suddenly abandoned around 580.

The Camelot Research Committee excavations at Cadbury Castle established the possibility that the hillfort may have been a fortress of an Arthur-type figure, a wealthy battle leader who imported expensive goods who held immense influence over the area but uncovered nothing to substantiate that Arthur was an historical figure.