Time and Out of Place Warriors
Over a third of the content of Rhonabwy’s Dream is spent on descriptions of the warrior’s and their horse’s attire; this is the reason the author claims the tale cannot be recited without a book. The tale is said to be satirical yet many search for a hidden meaning in the tale of Owain’s Ravens, but this was a common term for warriors during the Dark Ages.

The Dream of Rhonabwy is a late addition to the Mabinogion collection, as assembled by Lady Charlotte Guest, and probably the only text in the anthology written in North Wales.

The tale is quoted by some commentators to identify the location of the battle of Camlann (e.g. Graham Phillips, The Lost Tomb of Arthur, Bear & Co., 2016). It does not. The point missed by many is that this tale narrates the build-up to the battle of Badon, often described as Arthur’s greatest victory that brought peace to Britain for a generation and resulted in some of the Germanic settlers moving back to their homelands around the Rhine in northern Germania.

Unlike many dream narratives, Rhonabwy does not have a prophetic vision, neither does it contain romantic imagery like The Dream of Macsen Wledig in which the dreamer desires the woman of his vision. Rhonabwy’s dream is more like a real dream that you or me might experience. In his dream, time is reversed; he meets Iddog who was a messenger that the battle of Camlann – Arthur is therefore now dead.

Yet, we then come to Arthur preparing for the battle of Badon at Rhyd y Groes with an enormous army. Iddog performs a role similar to an Otherworld guide. And according to the Welsh Annals, Camlann occurred twenty-one years AFTER Badon. (see: Edgar Slotkin, “The Fabula, Story, and Text of Breuddwyd Rhonabwy”, CMCS 18, Winter, 1989). 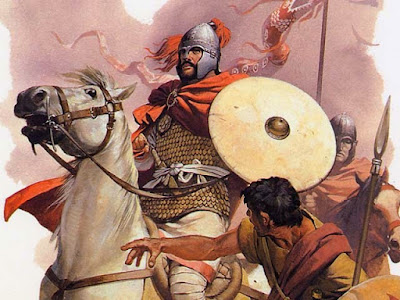 Other characters are also out of time sequence; Rhun, son of Maelgwn (d.586) and Owain son of Urien (d.595) should both be dated long after Arthur’s death and would not have not participated in Badon if it is accepted that the battle was fought within a generation either side of the date given by the Welsh Annals, i.e. 516 AD. Indeed, most historians tend to date the battle to within a decade either side of 500 AD.

Although out of time, Owain is perhaps not so out of place as first appears as he features prominently in the Arthurian cycle, notably as Yvain, the Knight of the Lion by the French poet Chrétien de Troyes, a tale similar to the Welsh Romance Owain, or the Lady of the Fountain also included in Lady Guest’s Mabinogion. The date of composition of Chrétien’s work is unknown but generally agreed to be in the second half of the 12th century, perhaps around the same time as the Dream of Rhonabwy. Chrétien undoubtedly used Celtic sources for his story which drew Roger Sherman Loomis to conclude that the Welsh Romance was the earlier of the two tales. Others are more cautious, suggesting both tales drew from a common original. From here on Ywain, or Owain, then featured in many Arthurian romances as a Knight of the Round Table.

Osla Big-Knife is Arthur’s opponent at Badon in the Dream of Rhonabwy, but in the earlier Arthurian tale Culhwch and Olwen, he features amongst Arthur’s warband in hunting the supernatural boar Twrch Trwyth. However, in Culhwch, Osla drowns when the scabbard for his big knife fills with water and drags him under. Osla is often confused with Octa of Kent, son or grandson of Hengist and traditional leader of the Saxons at Badon. In reality the leader of the Saxon’s at Badon is not recorded; the Anglo Saxon Chronicle fails to even mention the battle.

In Geoffrey of Monmouth’s Historia Regum Britanniae, c.1136, Octa is the leader of the Saxons brought across to defend Britain by Vortigern; here Geoffrey follows the 9th century Historia Brittonum (aka Nennius). Geoffrey continues with Octa emerging as the nemesis of Aurelius Ambrosius, the leader of Britons, who he based on the historical Ambrosius Aurelianus of Gildas. The 6th century cleric Gildas does not mention the leader of the Britons at Badon, however, it could be argued that his intent was toward Ambrosius, who he says rallied the beleaguered natives in a series of battles against the Saxons right up to the battle of Badon.

Evidently, the great advantage of introducing time-reversal to a tale, such as through a dream sequence, permits the author to employ out of place characters, forward and backward in the sequence of the story; chronological bounds become limitless.


Next >> The Location of Rhonabwy's Dream