"Thither after the battle of Camlan we took the wounded Arthur, guided by Barinthus to whom the waters and the stars of heaven were well known. With him steering the ship we arrived there with the prince, and Morgen received is with fitting honour, and in her chamber she placed the king on a golden bed and with er own hand she uncovered his honourable wound and gazed at it for a long time. At length she said that health could be restored to him if he stayed with her for a long time and made use of her healing art. Rejoicing, therefore, we entrusted the king to her and returning spread our sails to the favouring winds." (Geoffrey of Monmouth, Vita Merlini)


Introduction
Camlann the last battle of the legendary King Arthur. Over the course of time and the quill of medieval scribes it has come to be known as the downfall of the King at the hands of his nephew Modred. However, it was not always that way. 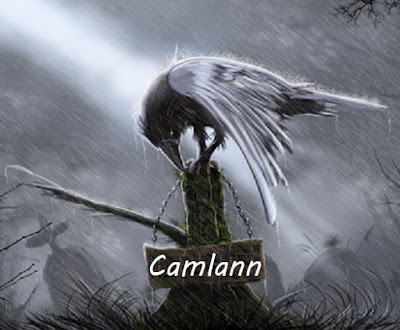 The earliest chronicle entry we have for the battle of Camlann is the Cambro-Latin text known as the ‘Annales Cambriae’ (The Welsh Annals), found in a manuscript (MS 3859) from the Harley collection,  along with the earliest version of the Historia Brittonum. Harley 3859 is dated to c.1100 but we can assume the Welsh Annals, as we have it today, was compiled around the time of the date of the last entry; AD 954.

The Welsh Annals include but two Arthurian entries:

Year 72 (c. AD 516) -The Battle of Badon, in which Arthur carried the cross of our Lord Jesus Christ on his shoulders for three days and three nights and the Britons were victors.

Year 93 (c. 537) -The Strife of Camlann in which Arthur and Medraut (Mordred) fell and there was death in Britain and in Ireland.

Yet the Badon entry in the Welsh Annals look suspiciously similar to an entry in the so-called Arthurian battle list in the Historia Brittonum:

"The eighth battle was in Guinnion fort, and in it Arthur carried the image of the holy Mary, the everlasting Virgin, on his shield, and the heathen were put to flight on that day, and there was great slaughter upon them, through the power of Jesus Christ and the power of the holy Virgin Mary, his mother."

The Badon and Guinnion entries are clearly very similar, leading to suggestions that they may derive from a common source. Indeed,  much discussion has ben held over the old Welsh word for 'shield' and 'shoulder'  (scuit / scuid) which may indicate copying. But no earlier source has been found; it is therefore likely the chronicler had knowledge of the account of Arthur's battle at Guinnion as contained within the Historia Brittonum and used it to put a Christian slant to the Badon entry when he put it in the Annals. However, regardless of this religious wordplay, the fact that Badon is accepted as a historical event is used to argue that the Camlann entry in the Welsh Annals must also have been a real event.

We find the battle of Badon in the 6th century account of Gildas, although he does not mention Arthur as the leader of the Britons. Writing in the early 8th century Bede, the first historian of the English, also records the battle but in essence follows Gildas. Hence, Badon is regarded as a historical event, but the location and the leader of the British are not agreed by historians.

Camlann is treated differently, particularly by the writers of Welsh tradition, who rarely claim Badon as a Welsh event, whereas Camlann is a solely Welsh affair in the earliest sources. Today historians tend to favour a northern site for Camlann, typically Camboglanna Roman fort on Hadrian’s Wall, in which the location fits well with claims for a Northern Arthur.

The Camlann entry in the Welsh Annals uses the Welsh word ‘Gueith’ while the Badon entry employs the Latin word ‘Bellum’ suggesting the chronicler used a native Welsh source; significantly, there are no earlier references for the battle of Camlann outside of Welsh tradition. Indeed, there are references to be found in Early Welsh poetry said to pre-date the Welsh Annals.

The earliest mention of Camlann is found in the 9th century Stanzas of the Graves (Englynion y Beddau). However, this cannot be considered a historical entry in any way as this is a catalogue of topographic folklore, detailing the graves of the warriors of Britain, such as:

“The grave of Tydain, father of the Muse, in the region of Bron Aren:
Where the wave makes a sullen sound
The grave of Dylan in Llan Beuno.”

Another mention is contained in a triad within the mythic tale Culhwch ac Olwen, which lists three men who escaped the battle of Camlann; Morvran the son of Tegid, Sandde Bryd Angel and Kynwyl Sant. And then further on in the same text we find a reference to one of the nine who plotted the battle. A later manuscript dated from the 17th century expands on the three in Culhwch and lists seven survivors.

Then we come to the Triads of the Island of Britan (Trioedd Ynys Prydein) in which references to Camlann are found in five Triads, which make it quite clear the battle was caused by Gwenhwyfar. Unlike Camlann, the Battle of Badon is entirely absent from both Culhwch and the Triads.

As Thomas Green asserts, in Welsh tradition prior to Geoffrey of Monmouth, Camlann is continually associated with mystical Otherworldly overtones and given the legendary context of the battle it “must be treated here as a battle belonging properly to the Arthurian legend rather than to any possible Arthurian history”.  (Concepts of Arthur, Tempus, 2007)

In a later text, The Dream of Rhonabwy, dated to the mid-12th century, as Rhonabwy rides across the plain of Argyngroeg, he meets a man who claims to have been one of the messengers between Arthur and Medrawd at the battle of Camlann and stirred up strife by passing insults on to Medrawd.

By tracing the messages left by the warriors of Camlann, as detailed in these early Welsh sources, is it possible to untangle the cause and plot the location of Arthur’s last battle?


Next >> Visions of Badon

Email ThisBlogThis!Share to TwitterShare to FacebookShare to Pinterest
Labels: Camlann