Plotting Camlan: Letters from the Dead

An.93. Gueith camlann in qua Arthur et Medraut corruerunt.
[The Strife of Camlann in which Arthur and Medraut fell]
Armageddon Found
The journey to Camlan has been a long road, a quest that has covered all corners of the country. I set out on this path with no preconceived notions as to the location of Camlan. I knew, of course, that there are sites in Wales that bear that name today. Yet, any connections between these locations and the battle of Camlan has been dismissed as the earliest record of them does not appear until the 16th century. [Scott Lloyd, The Arthurian Place Names of Wales, UMP, 2017]

This is an absurd suggestion; the first written record of Stonehenge does not appear until the 12th century yet we know it has been in existence since the early third millennium BC. The date of a place name's first documentation is not justification for dismissing its potential ancientness.

The name Camlan is made up of two elements; “Cam” meaning crooked and “Lan” meaning which can be derived from “Glan” river bank, or possibly “Llan” a sacred enclosure. Armed with this etymology historical detectives have scoured the country to find a suitable location for, by all accounts, the battle that caused the end of days for the Arthurian realm, the collapse of the Round Table, and the death of Arthur.

Most are seeking a site in which the British would have encountered barbarians, be they Saxons. Picts or Scotti. But in Welsh tradition the battle is never associated with Saxons and Modred was certainly not the villain, this was introduced by Geoffrey of Monmouth in the 12th century.

Historians tend to favour Camboglanna Roman fort by Hadrian’s Wall as the site of Camlan based solely on the etymology of the name; “crooked bank” which is appropriate for the site but hardly unique.

For many years Camboglanna was identified with Birdoswald Roman fort on the Wall with the added appeal of a chieftain’s Dark Age hall that was suddenly abandoned in the early 6th century, the traditional date of the battle. However, it is now accepted that Camboglanna is to be correctly identified as Castlesteads Roman fort, the twelfth fort on Hadrian's Wall, some seven miles west from Birdoswald.

Camboglanna was constructed 350 metres south of the Wall, being unique as the only fort built between the Wall and the rear Vallum to the south. An inscription dated to the 6th century is the only evidence for sub-Roman activity at the site. Overlooking the Cambeck Valley, Camboglanna guarded an important approach to the Wall. However, the site was drastically levelled in 1791 when the gardens of Castlesteads House were laid over it leaving no visible remains today.

This site immediately sounds tempting for the location of Arthur’s last battle but there is no record of any Dark Age battle here. Castlesteads went out of use when the Romans abandoned the fort in the 4th century. There are no Arthurian traditions here, no lore, no Dark Age battle to connect it with Arthur.

We must reject it as a candidate for the site of the battle of Camlan. Furthermore, it is argued that the name of the fort should have evolved into “Camglann” by the 6th century but the entry in the Welsh Annals shows it as “Camlan” as it would have become by the 10th century when the Annals were written down and it immediately becomes questionable if it was indeed a contemporary entry.

If the Camlan entry in the Welsh Annals is suspect then we should look at the Welsh traditional accounts of the battle prior to Geoffrey of Monmouth, or certainly those accounts free of his influence.

I started the quest for Camlan by examining the Dream of Rhonabwy although a 12th century text it is recognised as portraying traditional Welsh detail similar to that found in the early 11th century tale of Culhwch and Olwen.

In the tale Rhonabwy dreamt he was journeying with his companions across the plain of Argyngroeg and his intent was towards Rhyd y Groes on the Severn. As they travelled they came across a rider who said he was Iddawc the son of Mynyo but better known through his nickname Iddawc Cordd Prydain.

Iddawc tells Rhonabwy that was one of the messengers between Arthur and Mordred (Medraut / Medrawd in Welsh) at the battle and twisted their messages to each other to bring about the strife of Camlan. At least seven years has now passed since Camlan as Iddawc went to Y Llech Las to do penance, where he remained for seven years until he gained pardon. Yet, here Arthur’s forces are gathering for the battle of Badon, which has not yet happened and time appears to running backwards.

We then came to the three men who escaped Camlan according to a triad embedded in Culhwch and Olwen; Morfran son of Tegid; Sanddef Pryd Angel and Cynwyl Sant the last to leave Arthur.

Yet, by the 17th century Arthur’s curious association with the Celtic saints had increased the number of survivors from Camlann to seven, Sandde and Morfran are consistent from Culwch and Olwen, but Cynwal Sant has changed to St Cynfelyn, with the addition of three other saints, St Cedwyn, St Pedrog  and St Derfel with Geneid the Tall unidentified, although it has been suggested he was Hefeydd Hir, one of the seven chieftains left in Britain when Brân departed on his disastrous journey to Ireland in the story of Branwen, Daughter of Llŷr from the Mabinogi.

The association with the saints continued in a late manuscript known as Bonedd y Saint (Descent of the Saints), which records the genealogical tracts of the early British Saints, and shows Cawrdaf listed as the father of Mordred, in turn the father of Dyfnog (§.51), a 6th century saint.

Another genealogical tract lists Cawrdaf as the father of Iddawc, Agitator of Britain (§.88), the man who caused Camlan, the self-confessed traitor in Rhonabwy's Dream. Although we should be cautious in holding a high degree of confidence in these late genealogical listings, this does raise the intriguing proposition that Iddawc was the brother of Mordred.

However, Mordred is notably conspicuous by his absence from Arthur’s warband in early Welsh poems such as Preiddu Annwn, Pa Gur, and significantly from Culhwch and Olwen in which the “court list” calls up nearly three hundred characters from Arthurian lore and beyond. Significantly, after appearing in the 10th century Welsh Annals, in the entry for Camlan, Mordred is largely absent from Welsh literature until Geoffrey uses him as Arthur’s arch nemesis.

Mordred and Gwenhwyfar are also absent from the earliest version of the Triads of the Island of Britain (Trioedd Ynys Prydein) contained in the manuscript Peniarth 16. However, as later version of the Triads developed, recorded in the White Book of Rhydderch and the Red Book of Hergest (14th century), they both became implicitly involved with Camlan and according to the accounts contained within these later Triads the cause of the battle always involved Gwenhwyfar.

In contrast, there are ample allusions to the Battle of Camlan in Welsh sources prior to Geoffrey of Monmouth’s early 12th century Historia regum Britanniae, indicating the existence of a lost story of Camlan in Welsh tradition, yet none of these accounts elaborate on the cause of the battle or infer that it was caused by Mordred and Gwenhwyfar. Indeed, apart from the entry in the Welsh Annals, neither Mordred or Gwenhwyfar appear in Welsh literature securely dated before Geoffrey’s story; thus their later involvement with Camlan is possibly due directly the result of Geoffrey’s influence.

Finally, we come to the earliest mention of Camlan as found in the 9th or 10th century Stanzas of the Graves (Englynion y Beddau) from the Black Book of Carmarthen (Llyfr Du Caerfyrddin) containing topographic details of the graves of legendary Welsh heroic characters in stark contrast to the simple entry in the Welsh Annals:

The grave of Osfran’s son is at Camlan
After many a slaughter;
The grave of Bedwyr is on Tryfan hill

Patrick Sims-Williams speculated that there seems to be an association between Osfran and Morfran without developing the concept further. I pondered the idea if Osfran was the Nightcrow paired with Morfran the Seacrow? Whatever, Osfran is the key to Camlan. 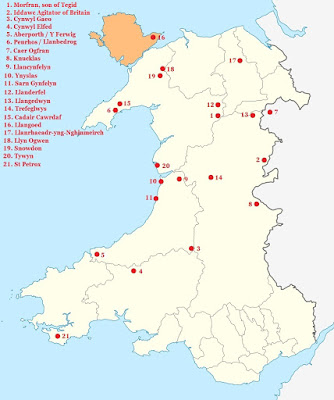 I have plotted these characters associated with the Welsh traditional account of Camlan on the map and now looked for some sort of pattern. They appear to be laid out in a best-fit outer group and then an inner group. 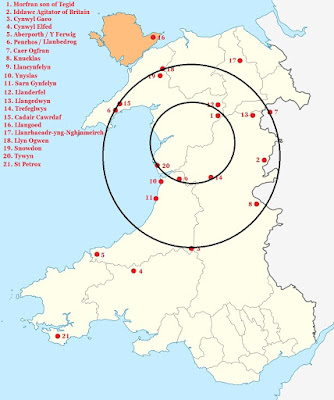 Finally I joined the locations of Morfran at Llyn Tegid, with Osfran at Tywyn and found they intersected two of the three Camlan sites in Wales. I was convinced there was something in this association between the site of Arthur’s last battle and these mythological crows. 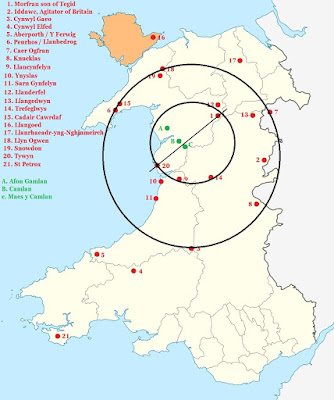 Unfortunately, it must be admitted, that none of these sites bears any early Arthurian traditions; Welsh poets remember the battle as a particularly bloody affair – is it really likely they would forget the location of such a catastrophic event?

When historical detectives have searched the British Isles and beyond for the site of Arthur’s last battle with similar sounding names in vain, we find that a place called Camlan, spelt exactly as recorded in early Welsh sources, at precisely and strategically in the border area of the old kingdoms of Gwynedd and Powys. This site is quite appealing as it suggests civil strife between the two kingdoms as suggested by Gildas when writing in the 6th century he states that external wars have ceased. 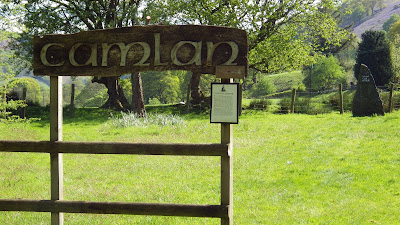 We find Camlan situated by the River Dyfi (Dovey) beyond the pass of Bwlch Oerddws on the A470 between the village of Dinas Mawddwy and Dolgellau, a strategic route between north and south Wales. A memorial stone to mark the site of the battlefield was erected in 1994. This is accessed by a footpath at the rear of the Meirion Mill car park where the neighbouring field is called Maes-y-Camlan. 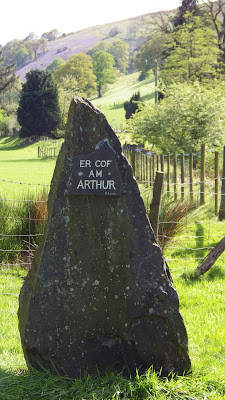 North of Dolgellau, an outlier to the two sites near Dinas Mawddwy, the Afon Gamlan rises on the east slope of Y Lethr, the highest point on the Rhinogs and flows easterly through Cwm Camlan to discharge into the Afon Mawddach just south of the village of Ganllwyd, surrounded by the King's Forest Coed y Brenin. The A470 road passes through the village here and broadly follows the same direction of the old Roman road known as Sarn Helen which used to ford the Eden just before it joins with the Mawddach and Gamlan. The exact route of the Roman road is unclear but is known to pass the Roman fort of Tomen-y-Mur by the now redundant nuclear power station of Trawsfynydd further north along the A470.

The A470 is a lonely road where it passes through Coed y Brenin, the oldest and most extensive forest in Wales. It is easy to see the ford of a Roman road in a deep forest as an attractive site for an ambush.

Intriguingly, we find the death omen of the “washer at the ford”, often a hag washing bloody garments at the ford of a river; if a warrior saw her washing his armour in the stream, it meant he was to die that day. In Celtic mythology she is known as Badb, an aspect of the Morrigan, known as the Battle Crow.

In conclusion, I have not found the site of a historical battle but I seem to have stumbled upon the mythological origins of the Strife of Camlann as revealed by the three crows.